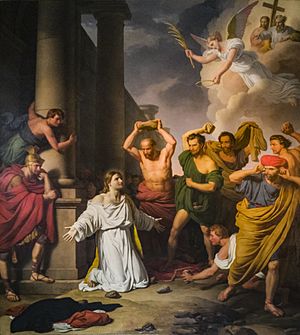 The Lapidation of St. Steven is a pinting by Charles Thévenin done in 1829. It is in St. Steven's Cathedral in Touluose

Stoning or lapidation is a form of capital punishment: a group of people throws stones at the convicted person, until this person dies. Today, it is mostly used in countries which follow sharia law.

All content from Kiddle encyclopedia articles (including the article images and facts) can be freely used under Attribution-ShareAlike license, unless stated otherwise. Cite this article:
Stoning Facts for Kids. Kiddle Encyclopedia.