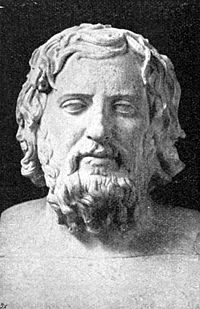 Xenophon (c. 430 – 354 BC), also known as Xenophon of Athens, was a Greek historian, soldier, mercenary, philosopher and a contemporary and admirer of Socrates. He is known for his writings on the history of his own times, the 4th century BC. He preserved the sayings of Socrates, and descriptions of life in ancient Greece and the Persian Empire.

All content from Kiddle encyclopedia articles (including the article images and facts) can be freely used under Attribution-ShareAlike license, unless stated otherwise. Cite this article:
Xenophon Facts for Kids. Kiddle Encyclopedia.