Oracle of Delphi facts for kids 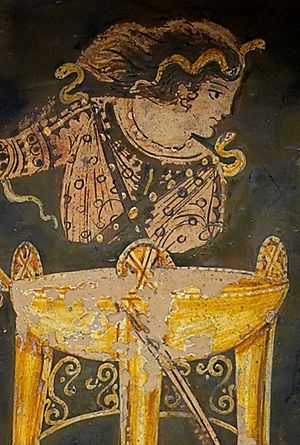 Paestan red-figure bell-krater depicting the Delphic oracle sitting atop her tripod, circa 330 B.C.

The Oracle of Delphi was an institution in Ancient Greece, dedicated to the god Apollo. Only one priestess operated at Delphi at any one time, and the name given to her was 'the Pythia'. The woman gave up her own name when she became priestess.

The Temple of Apollo was at Delphi, on the slopes of Mount Parnassus in Greece. According to legend, the god answered questions through the medium of his priestess, who was famous for her ambiguous predictions. Recently, scholars suggested that volcanic gases played their part in her strange utterings.

In 560 BC Croesus, King of Lydia, selected the Delphic Oracle and the Oracle at Thebes for advice. He asked if he should make war on the Persians. Both oracles gave the same response, that if Croesus made war on the Persians, he would destroy a mighty empire. They also advised him to seek out the most powerful Greek peoples and make alliance with them.

Croesus paid a high fee to the Delphians and then sent to the oracle asking "Would his monarchy last long?" The Pythia answered:

Whenever a mule shall become sovereign king of the Medes, then flee, and think not to stand fast, nor shame to be chicken-hearted.

Croesus thought it impossible that a mule should be king of the Medes and thus believed that he and his issue would never be out of power. He thus decided to make common cause with certain Greek city states and attack Persia.

However, it was he, not the Persians, who was defeated. This fulfilled the prophecy but not his interpretation of it. Apparently, he forgot that Cyrus, the victor, was half Mede (by his mother), half Persian (by his father) and so could be considered a mule.

All content from Kiddle encyclopedia articles (including the article images and facts) can be freely used under Attribution-ShareAlike license, unless stated otherwise. Cite this article:
Oracle of Delphi Facts for Kids. Kiddle Encyclopedia.