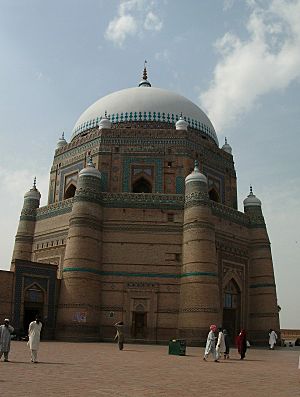 Side view of the Shah Rukn-I-Alam mausoleum 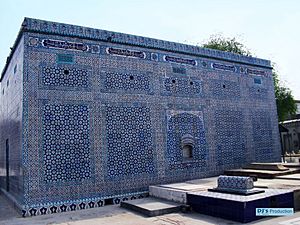 Multan is famous for its large number of Sufi shrines, including the unique rectangular tomb of Shah Gardez that dates from the 1150s and is covered in blue enameled tiles typical of Multan. 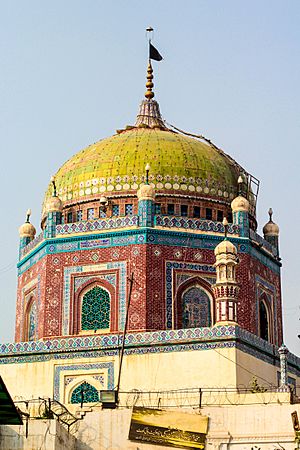 The shrine of Shamsuddin Sabzwari dates from 1330, and has a unique green dome. 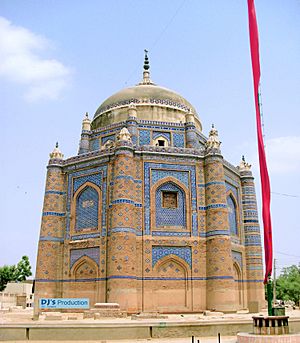 The Mausoleum of Shah Ali Akbar dating from the 1580s was built in the regional style that is typical of Multan's shrines.

Multan is a city in the Punjab province of Pakistan. It is the capital of the Multan District. Called the "City of the Saints", the history of the city goes back more than 5,000 years.

Multan is Moolastan which means the Place of origin (Moolam is source or origin).

The old city of Multan is a Walled city which is built on an ancient mound. Archaeologists believe the mound is made up of earlier cities going back to the Bronze Age. There were six gates into the old city but these have been destroyed over time. Three gates were rebuilt by the British when they governed the country. Inside the wall is a circular road, called the alang. The old city has narrow and winding streets, with houses crowded close together.

Multan is the main center of the South Punjab, Seraiki speaking region. The people here think their language is separate from the majority Punjabi language of Punjab and want to create a separate province of their own, called Seraikistan.

All content from Kiddle encyclopedia articles (including the article images and facts) can be freely used under Attribution-ShareAlike license, unless stated otherwise. Cite this article:
Multan Facts for Kids. Kiddle Encyclopedia.