The country is a monarchy. The capital of the Sultanate is Muscat. 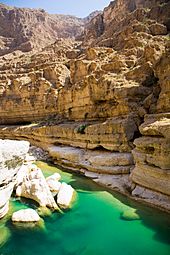 Oman lies between latitudes 16° and 28° N, and longitudes 52° and 60° E. A vast gravel desert plain covers most of central Oman, with mountain ranges along the north (Al Hajar Mountains) and southeast coast (Qara or Dhofar Mountains), where the country's main cities are also located: the capital city Muscat, Sohar and Sur in the north, and Salalah in the south. Oman's climate is hot and dry in the interior and humid along the coast. During past epochs, Oman was covered by ocean, witnessed by the large numbers of fossilized shells existing in areas of the desert away from the modern coastline. 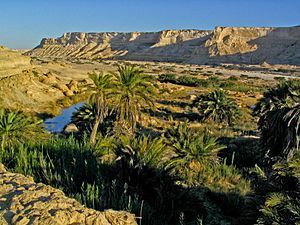 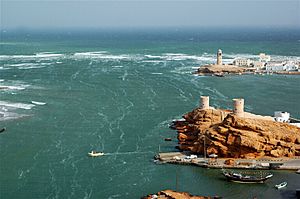 The coast of Sur, Oman

Oman's other exclave, inside UAE territory, known as Madha, located halfway between the Musandam Peninsula and the main body of Oman, is part of the Musandam governorate, covering approximately 75 km2 (29 sq mi). Madha's boundary was settled in 1969, with the north-east corner of Madha barely 10 m (32.8 ft) from the Fujairah road. Within the Madha exclave is a UAE enclave called Nahwa, belonging to the Emirate of Sharjah, situated about 8 km (5 mi) along a dirt track west of the town of New Madha, and consisting of about forty houses with a clinic and telephone exchange. The central desert of Oman is an important source of meteorites for scientific analysis.

Oman has a hot climate and very little rainfall. Annual rainfall in Muscat averages 100 mm (3.9 in), falling mostly in January. Dhofar is subject to the southwest monsoon, and rainfall up to 640 mm (25.2 in) has been recorded in the rainy season from late June to October. While the mountain areas receive more rainfall, some parts of the coast, particularly near the island of Masirah, sometimes receive no rain at all within the course of a year. The climate generally is very hot, with temperatures reaching around 50 °C (122.0 °F) (peak) in the hot season, from May to September. 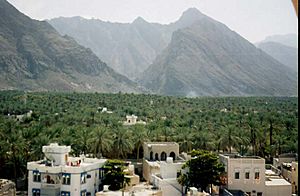 The Arabian humpback whales off Dhofar

Desert shrub and desert grass, common to southern Arabia, are found in Oman, but vegetation is sparse in the interior plateau, which is largely gravel desert. The greater monsoon rainfall in Dhofar and the mountains makes the growth there more luxuriant during summer; coconut palms grow plentifully in the coastal plains of Dhofar and frankincense is produced in the hills, with abundant oleander and varieties of acacia. The Al Hajar Mountains are a distinct ecoregion, the highest points in eastern Arabia with wildlife including the Arabian tahr.

Indigenous mammals include the leopard, hyena, fox, wolf, hare, oryx, and ibex. Birds include the vulture, eagle, stork, bustard, Arabian partridge, bee eater, falcon, and sunbird. In 2001, Oman had nine endangered species of mammals, five endangered types of birds, and nineteen threatened plant species. Decrees have been passed to protect endangered species, including the Arabian leopard, Arabian oryx, mountain gazelle, goitered gazelle, Arabian tahr, green sea turtle, hawksbill turtle, and olive ridley turtle. However, the Arabian Oryx Sanctuary is the first site ever to be deleted from UNESCO's World Heritage List, due to the government's decision to reduce the site to 10% of its former size so that the remainder could be opened to oil prospectors. 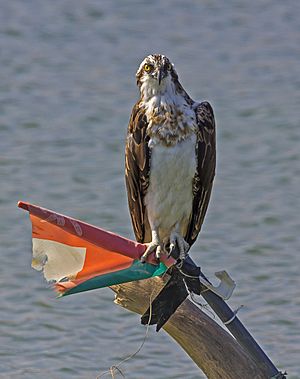 In recent years, Oman has become one of newer hot spots for whale watching, highlighting the critically endangered Arabian humpback whale, the most isolated and only non-migratory population in the world, sperm whales, and pygmy blue whales. 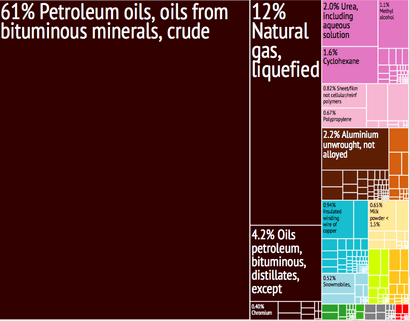 A proportional representation of Oman's exports 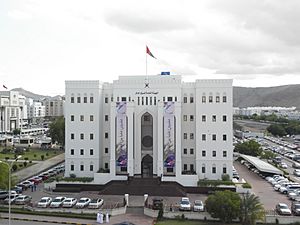 Oman has a relatively diversified economy, but remains dependent on oil exports.

Tourism is the fastest-growing industry in Oman.

Oman's proved reserves of petroleum total about 5.5 billion barrels, 25th largest in the world. Oil is extracted and processed by Petroleum Development Oman (PDO), with proven oil reserves holding approximately steady, although oil production has been declining. The Ministry of Oil and Gas is responsible for all oil and gas infrastructure and projects in Oman. Following the 1970s energy crisis, Oman doubled their oil output between 1979 and 1985. 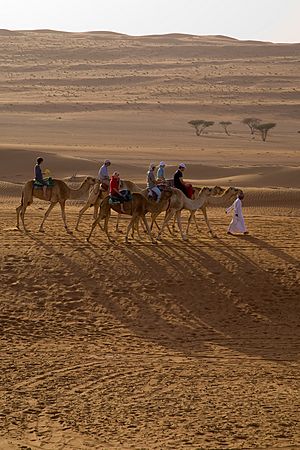 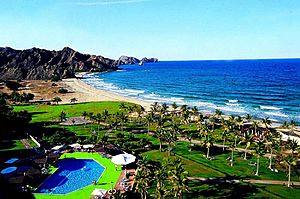 Tourism in Oman has grown considerably recently, and it is expected to be one of the largest industries in the country. The World Travel & Tourism Council stated that Oman is the fastest growing tourism destination in the Middle East.

Oman has one of the most diverse environments in the Middle East with various tourist attractions and is particularly well known for adventure and cultural tourism. Muscat, the capital of Oman, was named the second best city to visit in the world in 2012 by the travel guide publisher Lonely Planet. Muscat also was chosen as the Capital of Arab Tourism of 2012. 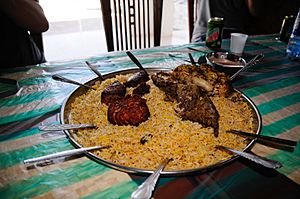 Omani cuisine is diverse and has been influenced by many cultures. Omanis usually eat their main daily meal at midday, while the evening meal is lighter. During Ramadan, dinner is served after the Taraweeh prayers, sometimes as late as 11 pm. However, these dinner timings differ according to each family; for instance, some families would choose to eat right after maghrib prayers and have dessert after taraweeh.

Arsia, a festival meal served during celebrations, consists of mashed rice and meat (sometimes chicken). Another popular festival meal, shuwa, consists of meat cooked very slowly (sometimes for up to 2 days) in an underground clay oven. The meat becomes extremely tender and it is infused with spices and herbs before cooking to give it a very distinct taste. Fish is often used in main dishes too, and the kingfish is a popular ingredient. Mashuai is a meal consisting of a whole spit-roasted kingfish served with lemon rice.

Rukhal bread is a thin, round bread originally baked over a fire made from palm leaves. It is eaten at any meal, typically served with Omani honey for breakfast or crumbled over curry for dinner. Chicken, fish, and lamb or mutton are regularly used in dishes. The Omani halwa is a very popular sweet, basically consisting of cooked raw sugar with nuts. There are many different flavors, the most popular ones being black halwa (original) and saffron halwa. Halwa is considered as a symbol of Omani hospitality, and is traditionally served with coffee. As is the case with most Arab states of the Persian Gulf, alcohol is only available over-the-counter to non-Muslims. Muslims can still purchase alcoholic drinks. Alcohol is served in many hotels and a few restaurants.

Since 28 October 2011, Oman is divided into eleven governorates (muhafazah):

Below the governorates, Oman is divided into provinces.

All content from Kiddle encyclopedia articles (including the article images and facts) can be freely used under Attribution-ShareAlike license, unless stated otherwise. Cite this article:
Oman Facts for Kids. Kiddle Encyclopedia.