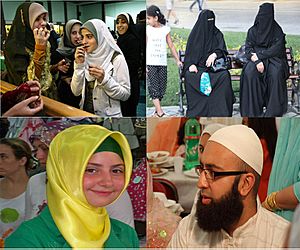 Hijab generally refers to clothing such as the veil and the headscarf, worn by Muslim women and girls as a symbol of modesty 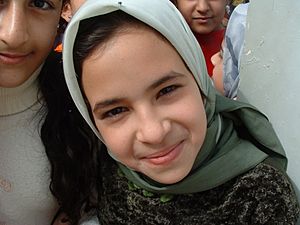 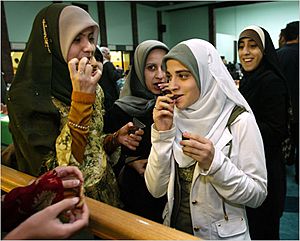 Hijab (حجاب) is the Arabic word for "to cover", and in general, means to be modest.

The Arabic word used to specifically mean this is "khimār" (خمار). This "veil" can come in several different types, such as an ordinary veil (which only covers the head), and a niqab or burka, which covers the entire body. There are many styles to wear. Muslim men must also observe standards of modest dress.

The Quran has no requirement that women cover their faces with a veil, or cover their bodies with the full-body burqa or chador.

All content from Kiddle encyclopedia articles (including the article images and facts) can be freely used under Attribution-ShareAlike license, unless stated otherwise. Cite this article:
Hijab Facts for Kids. Kiddle Encyclopedia.