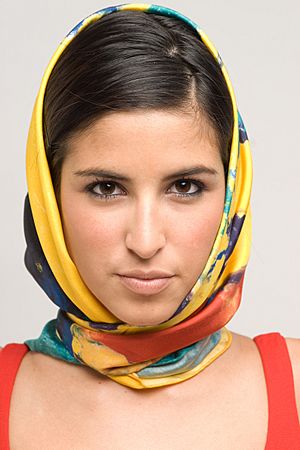 Headscarves are scarves covering most or all of the top of a woman's hair and her head. Headscarves may be worn for a variety of purposes, such as for warmth, for sanitation, for fashion or social distinction; with religious significance, to hide rampant baldness, out of modesty, or other forms of social convention.

A Afghan girl wares an Islamic style scarf at the International Women’s Day celebration in Pajshir in 2008. 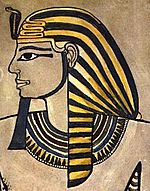 Amenhotep II in a Nemes headcloth.

Headscarves may have specific religious significance. Observant married Orthodox Jewish women, for example, are required to cover their hair, often employing scarves (or sometimes wigs) for the purpose. Headscarves were also worn by married Christian women in Medieval Europe, and even among some of the unmarried. This headcovering habit is better known as a wimple in English.

Islamic law says that women should dress in a special way. This dress code applies to women and adolescent girls, but not to children.

Headscarves and veils used for Muslim religious dress include:

Note that the Arabic word hijab refers to modest behaviour in general, and pertains to men and women, but it is sometimes used in other languages to describe the Muslim headscarf, also known as a khimar.

Some English speakers use the word "babushka" (grandma in Russian) to indicate the headscarf tied below the chin, as commonly worn in Eastern Europe. In most parts of Eastern Europe, headscarves are used mainly by elderly women (grandmothers) and this led the incorrect use of the "babushka" term. In Russia they are worn by women when they go to church to show their convictions to Russian Orthodoxy.

A plain red or scarlet headscarf was worn by female commissars and other women aligning themselves with Bolshevism in times of Russian Revolution and civil war.

The Keffiyeh is commonly used by Muslim men.

All content from Kiddle encyclopedia articles (including the article images and facts) can be freely used under Attribution-ShareAlike license, unless stated otherwise. Cite this article:
Head scarf Facts for Kids. Kiddle Encyclopedia.