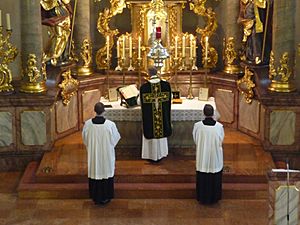 A Tridentine Mass in Speyer.

Tridentine Mass is the formula of the Latin Rite Catholic Mass that was commonly used before 1969. The Roman Missal contained the Church's guidelines on the Tridentine Mass for the first time in 1570. The missal was changed several times, and the last change to it was made in 1962. The celebration is done almost exclusively in the Latin language. Today, it is permitted as an alternative to the current form of the Mass that was introduced by the Second Vatican Council. There is also a translation into Church Slavonic which uses that language instead of Latin. The Slavonic form is in use mainly in the Balkans.

All content from Kiddle encyclopedia articles (including the article images and facts) can be freely used under Attribution-ShareAlike license, unless stated otherwise. Cite this article:
Tridentine Mass Facts for Kids. Kiddle Encyclopedia.