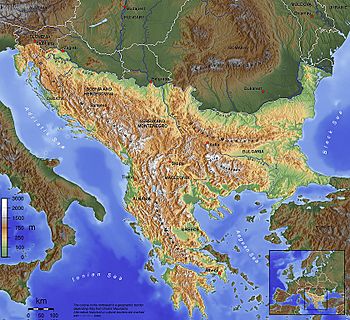 A geographical map of the Balkan peninsula 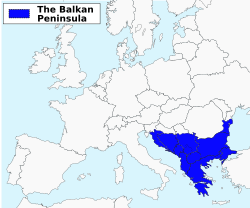 A political map of the Balkan Peninsula

The Balkans is a peninsula in Europe. The region has a combined area of 550,000 km² and an approximate population of 55 million people. The region takes its name from the Balkan Mountains, which run through the centre of Bulgaria into eastern Serbia and then continue to Slovenia as the Dinaric Alps.

The Balkans are bordered by water on three sides: the Black Sea to the east and branches of the Mediterranean Sea to the south and west (including the Adriatic, Ionian, Aegean and Marmara seas). The Balkan Peninsula is bordered on the north by the Danube, Sava, and Krča rivers.

Countries in the Balkan region are:

Other countries that are not in the Balkan region but that are close to it and/or play or have played an important role in the region's politics, culture and history: 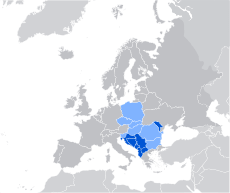 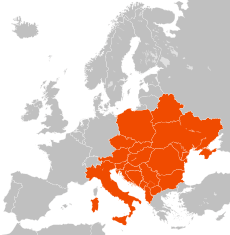 Population composition by nationality and religion 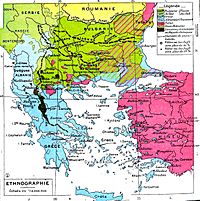 Ethnic map of the Balkans prior to the First Balkan War

The region's principal nationalities include:

The most common religions in the Balkans are Eastern Orthodox and Catholic Christianity and Islam (mostly Sunni or non-denominational). Many different specific kinds of each faith are practiced, with each of the Eastern Orthodox countries having its own national church with its own patriarch. 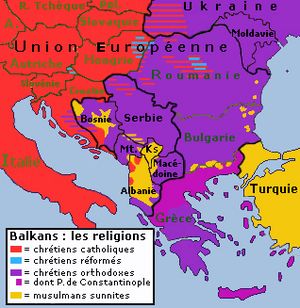 Religious map of the Balkans (in French)

Eastern Orthodoxy is the principal religion in the following countries:

Roman Catholicism is the principal religion in the following countries:

Islam is the principal religion in the following countries:

Bosnia and Herzegovina is a special case - 50% are Muslim Bosniaks, 31% are Serbian Orthodox, and 15% are Catholic Croats (therefore 46% are Christian). The remaining 4% adhere to other denominations of Christianity, other religions, or are irreligious.

All content from Kiddle encyclopedia articles (including the article images and facts) can be freely used under Attribution-ShareAlike license, unless stated otherwise. Cite this article:
Balkans Facts for Kids. Kiddle Encyclopedia.