View from Ray Resthouse towards the Central Balkan Mountains. The Raysko Praskalo waterfall is in the middle. 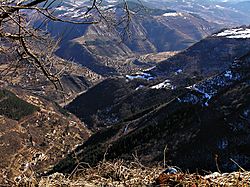 The Iskar River passing through the mountains in a gorge 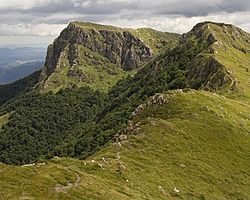 The Balkan mountain range (Bulgarian and Serbian: Стара планина, Stara planina, "Old Mountain") is an extension of the Carpathian mountain range, separated from it by the Danube River.

The Balkan range runs 560 km from eastern Serbia eastward through central Bulgaria to Cape Emine on the Black Sea.

The highest peak on the Balkan peninsula is Musala in the Rila mountains near Sofia (Rila range), with 2,925 m, closely followed by Mount Olympus in Greece and Vihren (Pirin range).

The highest peaks of the Stara planina itself are in central Bulgaria. The highest peak is Botev (2,376 m), in the Central Balkan National Park (established 1991).

There are paved roads crossing Stara Planina at the following passes (listed from west to east):

All content from Kiddle encyclopedia articles (including the article images and facts) can be freely used under Attribution-ShareAlike license, unless stated otherwise. Cite this article:
Balkan Mountains Facts for Kids. Kiddle Encyclopedia.