Kids Encyclopedia Facts
This page is about the 9th-century Khan of Bulgaria. For other uses, see Krum (disambiguation).

Krum (Bulgarian: Крум, Greek: Κρούμος/Kroumos)[A], often referred to as Krum the Fearsome (Bulgarian: Крум Страшни) was the Khan of Bulgaria from sometime between 796 and 803 until his death in 814. During his reign the Bulgarian territory doubled in size, spreading from the middle Danube to the Dnieper and from Odrin to the Tatra Mountains. His able and energetic rule brought law and order to Bulgaria and developed the rudiments of state organization.

Krum was a Bulgar chieftain from Pannonia. His background and the surroundings of his accession are unknown. It has been speculated that Krum might have been a descendant of the old Bulgar royal house of Kubrat. The name Krum is of Turkic origin and means "governor prince" (from kurum "rule, leadership, administration").

Around 805, Krum defeated the Avar Khaganate to destroy the remainder of the Avars and to restore Bulgar authority in Ongal again, the traditional Bulgar name for the area north of the Danube across the Carpathians covering Transylvania and along the Danube into eastern Pannonia. This resulted in the establishment of a common border between the Frankish Empire and Bulgaria, which would have important repercussions for the policy of Krum's successors.

Conflict with Nikephoros I 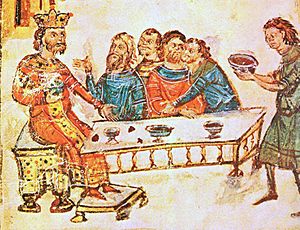 Krum feasts with his nobles as a servant (right) brings the skull of Nikephoros I, fashioned into a drinking cup, full of wine.

Krum engaged in a policy of territorial expansion. In 807 Bulgarian forces defeated the Byzantine army in the Struma valley. In 809 Krum besieged and forced the surrender of Serdica, slaughtering the garrison of 6,000 despite a guarantee of safe conduct. This victory provoked Byzantine Emperor Nikephoros I to settle Anatolian populations along the frontier to protect it and to attempt to retake and refortify Serdica, although this enterprise failed.

In early 811, Nikephoros I undertook a massive expedition against Bulgaria, advancing to Marcellae (near Karnobat). Here Krum attempted to negotiate on July 11, 811, but Nikephoros was determined to continue with his plunder. His army somehow avoided Bulgarian ambushes in the Balkan Mountains and made its way into Moesia. They managed to take over Pliska on July 20, as only a small, hastily assembled army was in their way. Here Nikephoros helped himself to the treasures of the Bulgarians while setting the city afire and turning his army on the population. A new diplomatic initiative from Krum was rebuffed.

The chronicle of the 12th-century patriarch of the Syrian Jacobites, Michael the Syrian, describes the brutalities and atrocities of Nikephoros: "Nikephoros, emperor of the Byzantine empire, walked into the Bulgarians' land: he was victorious and killed great number of them. He reached their capital, seized it and devastated it. His savagery went to the point that he ordered to bring their small children, got them tied down on earth and made thresh grain stones to smash them."

While Nikephoros I and his army pillaged and plundered the Bulgarian capital, Krum mobilized as many soldiers as possible, giving weapons even to peasants and women. This army was assembled in the mountain passes to intercept the Byzantines as they returned to Constantinople. At dawn on July 26, the Bulgarians managed to trap the retreating Nikephoros in the Vărbica pass. The Byzantine army was wiped out in the ensuing battle and Nikephoros was killed, while his son Staurakios was carried to safety by the imperial bodyguard after receiving a paralyzing wound to the neck. It is said that Krum had the Emperor's skull lined with silver and used it as a drinking cup.

Conflict with Michael I Rangabe

Staurakios was forced to abdicate after a brief reign (he died from his wound in 812), and he was succeeded by his brother-in-law Michael I Rangabe. In 812 Krum invaded Byzantine Thrace, taking Develt and scaring the population of nearby fortresses to flee towards Constantinople. From this position of strength, Krum offered a return to the peace treaty of 716. Unwilling to compromise from a position of weakness, the new Emperor Michael I refused to accept the proposal, ostensibly opposing the clause for exchange of deserters. To apply more pressure on the Emperor, Krum besieged and captured Mesembria (Nesebar) in the autumn of 812.

In February 813 the Bulgarians raided Thrace but were repelled by the Emperor's forces. Encouraged by this success, Michael I summoned troops from the entire Byzantine Empire and headed north, hoping for a decisive victory. Krum led his army south towards Adrianople and pitched camp near Versinikia. Michael I lined up his army against the Bulgarians, but neither side initiated an attack for two weeks. Finally, on June 22, 813, the Byzantines attacked but were immediately turned to flight. With Krum's cavalry in pursuit, the rout of Michael I was complete, and Krum advanced on Constantinople, which he besieged by land. Discredited, Michael was forced to abdicate and become a monk — the third Byzantine Emperor forced to give up the throne by Krum in as many years.

Conflict with Leo V the Armenian

The new emperor, Leo V the Armenian, offered to negotiate and arranged for a meeting with Krum. As Krum arrived, he was ambushed by Byzantine archers and was wounded as he made his escape. Furious, Krum ravaged the environs of Constantinople and headed home, capturing Adrianople en route, transporting its inhabitants (including the parents of the future Emperor Basil I) across the Danube. In spite of the approach of winter, Krum took advantage of good weather to send a force of 30,000 into Thrace, capturing Arcadiopolis (Lüleburgaz) and carrying off 50,000 captives to the Bulgarian lands across the Danube. The loot from Thrace was used to enrich Krum and his nobility and included architectural elements utilized in the reconstruction of Pliska, perhaps largely by captured Byzantine artisans.

Krum spent the winter preparing for a major attack on Constantinople, where rumor reported the assemblage of an extensive siege park to be transported on 5,000 carts. He died before he set out, however, on April 13, 814, and he was succeeded by his son Omurtag. 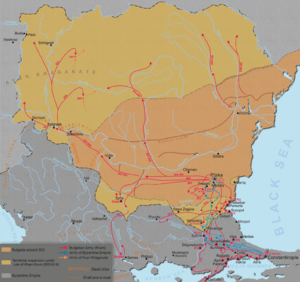 Krum was remembered for instituting the first known written Bulgarian law code, which ensured subsidies to beggars and state protection to all poor Bulgarians. Drinking, slander, and robbery were severely punished. Through his laws he became known as a strict but just ruler, bringing Slavs and Bulgars into a centralized state.

All content from Kiddle encyclopedia articles (including the article images and facts) can be freely used under Attribution-ShareAlike license, unless stated otherwise. Cite this article:
Krum Facts for Kids. Kiddle Encyclopedia.