It has been part of the lands of Dardani in the years BC, Roman, Byzantine, Bulgarian, Serbian and Ottoman Empires, then the Kingdom of Serbia, Italian Empire and Yugoslavia in the 20th century. After NATO bombed Yugoslavia in 1999, the territory came under the administration of the United Nations.

The Assembly of Kosovo declared indepedence in February 2008. This is disputed by Serbia and some other states.

To the north and east of Kosovo is the rest of Serbia. To the south of Kosovo is the Republic of Macedonia. To the west of Kosovo are the Albania and Montenegro. The capital is Prishtina. Prishtina is also Kosovo's largest city. About two million people live in Kosovo. A majority of them are of Albanian origin, but there are also Serbs living in the most northern part of Kosovo.

Medieval Monuments in Kosovo is a combined UNESCO World Heritage Site consisting of four Serbian Orthodox churches and monasteries. The constructions were founded by members of Nemanjić dynasty, the most important dynasty of Serbia in the Middle Ages.

On 17 February 2008, Kosovo unilaterally declared its independence from Serbia. It has since gained diplomatic recognition as a sovereign state by 101 United Nations member states. Serbia does not recognize Kosovo as a sovereign state, although with the Brussels Agreement of 2013, it has accepted it.

Kosovo has a lower-middle-income economy and has experienced solid economic growth over the last decade by international financial institutions, and has experienced growth every year since the onset of the 2008 global financial crisis. Kosovo is a member of the International Monetary Fund, World Bank, Regional Cooperation Council, and has applied for membership of Interpol and for observer status in the Organization of the Islamic Cooperation. 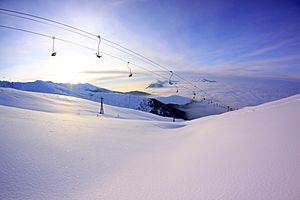 Brezovica ski resort is one of the most visited winter tourist destinations in Kosovo.

The natural values of Kosovo represent quality tourism resources. The description of Kosovo's potential in tourism is closely related to its location, in the center of the Balkan Peninsula in Southeastern Europe. It represents a crossroads which historically dates back to antiquity. Kosovo serves as a link in the connection between Central and Southern Europe and the Adriatic Sea and Black Sea. The mountainous west and southeast of Kosovo has great potential for winter tourism. Skiing takes place at the winter resort of Brezovica within the Šar Mountains. 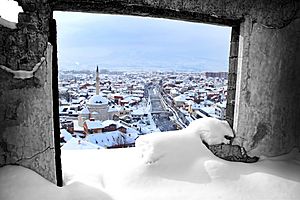 Other major attractions include the capital, Pristina, the historical cities of Prizren, Peć and Gjakova but also Ferizaj and Gjilan.

The New York Times included Kosovo on the list of 41 places to visit in 2011. 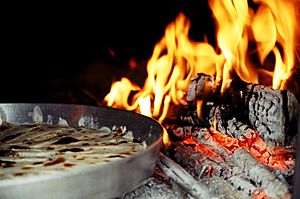 The Kosovan cuisine is mixed with influences of the Albanian and Serbian origins. Food is an important component in the social life of the people of Kosovo particularly during religious holidays such as Christmas, Easter and Ramadan. For festive occasions, Baklava, Lokum and Halva are traditionally prepared in almost every household throughout Kosovo and the Balkans regardless of ethnicity or cultural identity.

Perhaps the most prominent and traditional examples of Kosovan food include the Flia and Pite which are served with assorted vegetables, fruit preserves, honey and yogurt. Flia is composed of multiple layered crepe and is predominantly brushed with cream while Pite are filled with a mixture of salty cheese, meat, potatoes or leek. 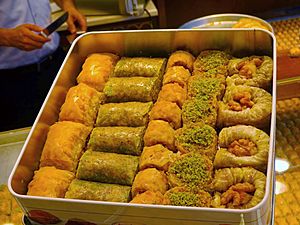 The cuisine of Kosovo features a wide range of fresh fruits, vegetables and herbs such as salt, red and black pepper. The people of Kosovo enjoy a wide variety of meat and fish products among other chicken, beef, kebab, suxhuk and lamb which is considered to be the traditional meat for religious occasions due to its religious connections.

Tea such as Albanian-style mountain tea or Russian and Turkish-style black tea are a widely consumed beverage throughout Kosovo and particularly served at cafés, restaurants or at home. Coffee is another popular drink although Kosovo is steeped in culture and their coffee culture is a big part of the modern society. 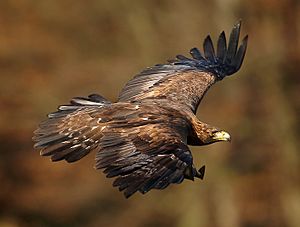 The flora has more than 1,800 species, but the actual number is estimated to be higher than 2,500 species. 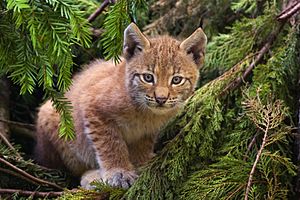 The Balkan lynx subspecies is found in Kosovo

The fauna is composed of a wide range of species. The mountains west and southeast provide a great habitat for several rare or endangered species including brown bears, lynxes, wild cats, wolves, foxes, wild goats, roebucks and deers.

A total of 255 species of birds have been recorded, with raptors such as the golden eagle, eastern imperial eagle and lesser kestrel living principally in the mountains of Kosovo.

All content from Kiddle encyclopedia articles (including the article images and facts) can be freely used under Attribution-ShareAlike license, unless stated otherwise. Cite this article:
Kosovo Facts for Kids. Kiddle Encyclopedia.