Flag of Kosovo facts for kids 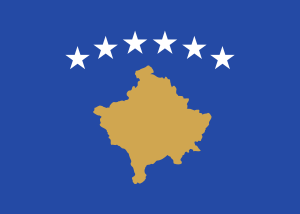 The flag of the Republic of Kosovo was adopted after its independence from Serbia on 17 February 2008.

The background of the flag is blue in color. A map of Kosovo and six stars are on the map. Officially, the stars mean Kosovo's six major ethnic groups.

All content from Kiddle encyclopedia articles (including the article images and facts) can be freely used under Attribution-ShareAlike license, unless stated otherwise. Cite this article:
Flag of Kosovo Facts for Kids. Kiddle Encyclopedia.