Montenegro (meaning Black Mountain) is a country in Southeastern Europe. It is on the Adriatic Sea, between Albania (to the South) and Croatia to the North. Inland (to the East and South-East) it also has a common border with Serbia, Kosovo and Bosnia and Herzegovina.

The country came to exist when its people decided to split from the country Serbia and Montenegro on May 21, 2006. For most of the 20th century it was part of Yugoslavia. It had also been independent before World War I and existed as a kingdom. Its leader is Filip Vujanović.

The size of the economy's GDP is $4.114 billion and it has a population of 625,000 people. The traditional old capital of Montenegro is Cetinje, but Podgorica is the new one. The country adopted the Euro unilaterally as Montenegro does not have its own currency, but the adoption has raised the national debt to 57 percent of GDP in 2011. 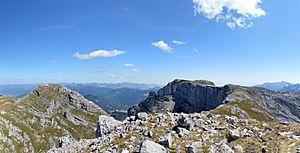 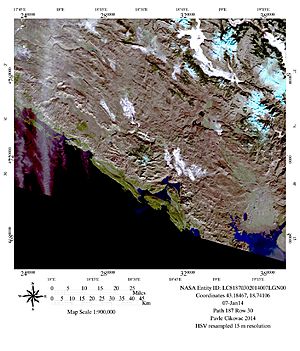 Internationally, Montenegro borders Croatia, Bosnia and Herzegovina, Serbia, Kosovo, and Albania. It lies between latitudes 41° and 44°N, and longitudes 18° and 21°E. 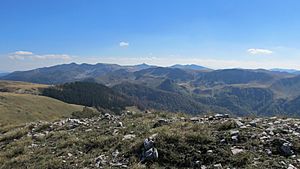 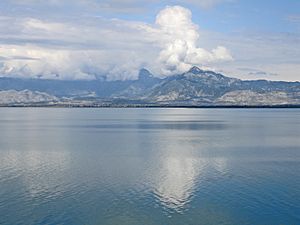 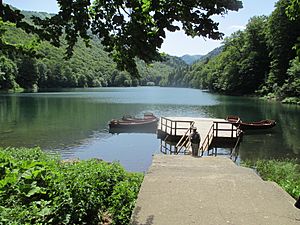 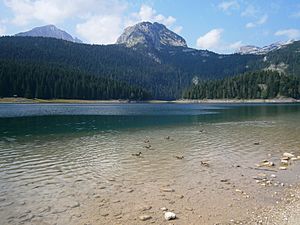 Montenegro ranges from high peaks along its borders with Serbia, Kosovo, and Albania, a segment of the Karst of the western Balkan Peninsula, to a narrow coastal plain that is only 1.5 to 6 kilometres (1 to 4 miles) wide. The plain stops abruptly in the north, where Mount Lovćen and Mount Orjen plunge into the inlet of the Bay of Kotor.

The mountains of Montenegro include some of the most rugged terrain in Europe, averaging more than 2,000 metres (6,600 feet) in elevation. One of the country's notable peaks is Bobotov Kuk in the Durmitor mountains, which reaches a height of 2,522 m (8,274 ft). Owing to the hyperhumid climate on their western sides, the Montenegrin mountain ranges were among the most ice-eroded parts of the Balkan Peninsula during the last glacial period. 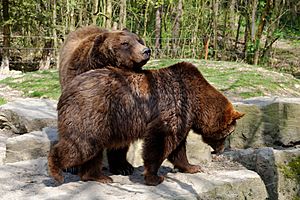 The Eurasian brown bear, a protected species in Montenegro. 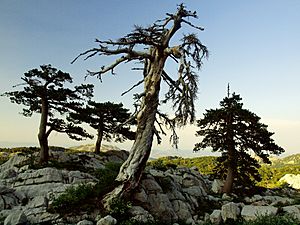 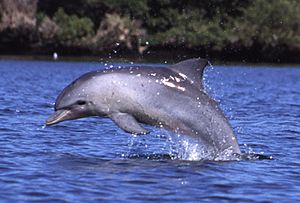 The common bottlenose dolphin is often seen in the Bay of Kotor.

The diversity of the geological base, landscape, climate, and soil, and the position of Montenegro on the Balkan Peninsula and Adriatic Sea, created the conditions for high biological diversity, putting Montenegro among the "hot-spots" of European and world biodiversity. The number of species per area unit index in Montenegro is 0.837, which is the highest index recorded in any European country.

Clockwise from left: 1. Orthodox Cathedral of the Resurrection of Christ, Podgorica 2. Roman Catholic cathedral in Kotor 3. Church of Our Lady of the Rosary in Perast – in the background Saint George Benedictine monastery and Our Lady of the Rocks on the two islets off the coast of Perast in Bay of Kotor 4. Ostrog Monastery − the famous and most popular Christian pilgrimage site in Montenegro. 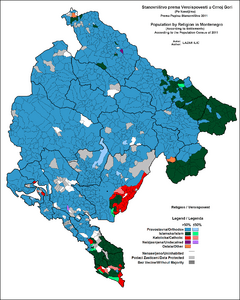 Religious structure of Montenegro by settlements, 2011

Despite tensions between religious groups during the Bosnian War, Montenegro remained fairly stable, mainly due its population having a historic perspective on religious tolerance and faith diversity. Religious institutions from Montenegro all have guaranteed rights and are separate from the state. The second largest religion is Islam, which amounts to 19% of the total population of the country. One third of Albanians are Catholics (8,126 in the 2004 census) while the two other thirds (22,267) are mainly Sunni Muslims; in 2012 a protocol passed that recognizes Islam as an official religion in Montenegro, ensures that halal foods will be served at military facilities, hospitals, dormitories and all social facilities; and that Muslim women will be permitted to wear headscarves in schools and at public institutions, as well as ensuring that Muslims have the right to take Fridays off work for the Jumu'ah (Friday)-prayer. There is also a small Roman Catholic population, mostly Albanians with some Croats, divided between the Archdiocese of Antivari headed by the Primate of Serbia and the Diocese of Kotor that is a part of the Church of Croatia.

All content from Kiddle encyclopedia articles (including the article images and facts) can be freely used under Attribution-ShareAlike license, unless stated otherwise. Cite this article:
Montenegro Facts for Kids. Kiddle Encyclopedia.