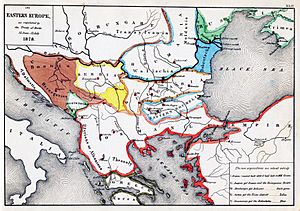 Europe after the Congress of Berlin.

The Treaty of Berlin was a part of the Congress of Berlin (June 13-July 13, 1878). In it, the United Kingdom, Austria-Hungary, France, Germany, Italy, Russia and the Ottoman Empire wrote the Treaty of San Stefano.

Problems within the treaty

The most important problem in the Treaty was deciding what would happen to the Kingdom of Bulgaria. However, Russia insisted that Bulgaria should not be talked about in the treaty. The previous Treaty of San Stefano had created a huge Bulgarian state which was just what Great Britain and Austria-Hungary did not want.

The treaty said that Romania, Serbia and Montenegro were to become independent. The Ottoman province of Bosnia-Herzegovina was given to Austria-Hungary.

The three newly-independent states soon declared themselves kingdoms (Romania in 1881, Serbia in 1882 and Montenegro in 1910). Austria-Hungary took Bosnia officially in 1908, causing the major European crisis.

All content from Kiddle encyclopedia articles (including the article images and facts) can be freely used under Attribution-ShareAlike license, unless stated otherwise. Cite this article:
Treaty of Berlin (1878) Facts for Kids. Kiddle Encyclopedia.