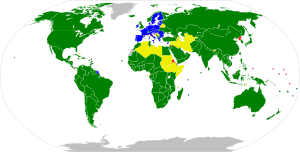 The World Trade Organization (WTO) is a large international organization to regulate trade that was established in 1995. As of 2018, there are 164 members and 23 observer nations. In the WTO, agreements are made on trade between countries. The General Agreement on Tariffs and Trade (GATT) means that countries have to lower barriers to international trade, such as tariff on goods crossing borders. This lets businesses operate in many different countries.

While it is highly regarded, from its beginning the WTO has also received criticism.

All content from Kiddle encyclopedia articles (including the article images and facts) can be freely used under Attribution-ShareAlike license, unless stated otherwise. Cite this article:
World Trade Organization Facts for Kids. Kiddle Encyclopedia.