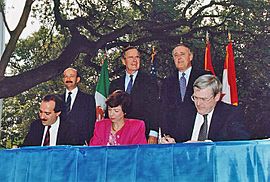 The North American Free Trade Agreement (NAFTA) is a trade agreement between Mexico, the United States, and Canada. The agreement was signed by U.S. President George H.W. Bush, Canadian Prime Minister Brian Mulroney, and Mexican President Carlos Salinas on December 17, 1992 in San Antonio, Texas, and took effect on January 1, 1994. It removed taxes on products traded between the United States, Canada, and Mexico. It also protects copyrights, patents, and trademarks between those three countries. It was updated with the North American Agreement on Environmental Cooperation, which helped set more environment regulations and helped reduce pollution. It was also updated with the North American Agreement for Labor Cooperation, which helped people fight for better work conditions.

NAFTA also encourages more immigration from Mexico to the US. Since small businesses can no longer be protected by tariffs, many small business owners in Mexico cannot compete with the prices of subsidized products from the US and therefore many of them have gone under, or they lost more money than they could make. As a result, many Mexicans have gone to the US looking for work. The human rights organization EZLN (Ejército Zapatista de la Liberación Nacional), a revolutionary Mexican grass roots movement, is a strong opponent of NAFTA and points out how its provisions only make the economic situation worse for the poorest in Mexico and better for multi-national corporations.

With the increased ease by which Mexico can import food products from the United States, the role of Mexican farmers is overwhelmed by the output of American farming. This is a notable con of NAFTA. According to Thomas Net Industry Market Trends, over 1 million Mexican farmers have lost their jobs as a result of the agreement.

The American economy lost about 683,000 jobs thanks to NAFTA -- more than 60% of which were in the manufacturing sector. Almost 35,000 Ohioans found themselves unemployed, or without jobs, thanks to a free trade agreement that’s been a disaster for our nation’s industrial base. - Sharrod Brown

It was possible that NAFTA would encourage Mexican citizens to stay in their country since their manufacturing work could still reach the American market easily. But since the creation of NAFTA, illegal immigration between Mexico and the United States has only increased. Over the 10-year period between 1990 and 2000, the number of illegal immigrants per year doubled, or increased two times, despite the creation of NAFTA in 1994, according to Thomas Net Industry Market Trends. NAFTA not being more effective in preventing the immigration crisis is a disadvantage to the agreement.

All content from Kiddle encyclopedia articles (including the article images and facts) can be freely used under Attribution-ShareAlike license, unless stated otherwise. Cite this article:
North American Free Trade Agreement Facts for Kids. Kiddle Encyclopedia.