Justin Pierre James Trudeau (born December 25, 1971) is a Canadian politician serving as the 23rd and current Prime Minister of Canada since 2015 and Leader of the Liberal Party since 2013. Trudeau is the second-youngest Canadian Prime Minister, after Joe Clark; he is also the first to be related to a previous holder of the post, as the eldest son of Pierre Trudeau.

Born in Ottawa, Trudeau attended Collège Jean-de-Brébeuf and graduated from McGill University in 1994 and the University of British Columbia in 1998. He gained a high public profile in October 2000, when he delivered a eulogy at his father's state funeral. After graduating, he worked as a teacher in Vancouver, British Columbia. He completed one year of an engineering program at Montreal's École Polytechnique, from 2002 to 2003, and one year of a master's program in environmental geography at McGill University, from 2004 to 2005.

In the 2008 federal election, he was elected to represent the riding of Papineau in the House of Commons. In 2009, he was appointed the Liberal Party's critic for youth and multiculturalism, and the following year, became critic for citizenship and immigration. In 2011, he was appointed as critic for secondary education and youth and amateur sport. Trudeau won the leadership of the Liberal Party in April 2013 and went on to lead his party to victory in the 2015 federal election, moving the third-placed Liberals from 36 seats to 184 seats, the largest-ever numerical increase by a party in a Canadian general election. 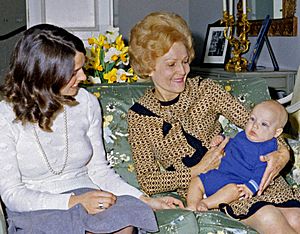 On June 23, 1971, the Prime Minister's office had announced that Prime Minister Pierre Elliott Trudeau's wife was pregnant and due in December. He was born on Christmas Day 1971 at 9:27 pm EST at the Ottawa Civic Hospital. Trudeau is the second child in Canadian history to be born to a Prime Minister in office, Trudeau's younger brothers Alexandre (Sacha) (born December 25, 1973) and Michel (October 2, 1975 – November 13, 1998) were the third and fourth.

Trudeau is predominantly of Scottish and French Canadian descent. His grandfathers were businessman Charles-Émile Trudeau and Scottish-born James Sinclair, who served as Minister of Fisheries in the cabinet of Prime Minister Louis St. Laurent. Trudeau's maternal great-grandfather Thomas Bernard was born in Makassar and immigrated to Penticton, British Columbia, in 1906 at age 15 with his family.

Trudeau was christened at Ottawa's Notre Dame Basilica on the afternoon of January 16, 1972, which marked his first public appearance. On April 14, 1972, Trudeau's father and mother hosted a gala at the National Arts Centre, at which visiting U.S. president Richard M. Nixon said, "I'd like to toast the future prime minister of Canada, to Justin Pierre Trudeau" to which Pierre Elliott Trudeau responded that should his son ever assume the role, he hoped he would have "the grace and skill of the president". Earlier that same day U.S. first lady Pat Nixon had come to see him in his nursery to deliver a gift, a stuffed toy Snoopy.

His parents publicly announced their separation on May 27, 1977, when Trudeau was five years old, with his father having custody.

Trudeau lived at 24 Sussex Drive, Ottawa, the official residence of Canada's prime minister, from his birth until his father's government was defeated in the federal election on May 22, 1979. The Trudeaus were expected to move into the residence of the Leader of the Official Opposition, Stornoway, at 541 Acacia Avenue in Rockcliffe Park, but because of flooding in the basement they were unable to make the move. The Trudeaus returned to the prime minister's official residence in February 1980 after the election that returned his father to the Prime Minister's Office.

His father had intended Trudeau to begin his formal education at a French Lycée, but Trudeau's mother convinced his father of the importance of sending their sons to a public school. In the end, Trudeau was enrolled in 1976 in the French immersion program at Rockcliffe Park Public School. He could have been dropped off by limousine, but his parents elected he take the school bus albeit with a Royal Canadian Mounted Police car following. This was followed by one year at the private Lycée Claudel d'Ottawa.

After his father's retirement, in June 1984 he began attending the private Collège Jean-de-Brébeuf, his father's alma mater. In 2008, Trudeau said that of all his early family outings he enjoyed camping with his father the most, because "that was where our father got to be just our father – a dad in the woods". During the summers his father would send him and his brothers to Camp Ahmek, on Canoe Lake, in Algonquin Provincial Park, where he would later work in his first paid employment as a camp counselor. 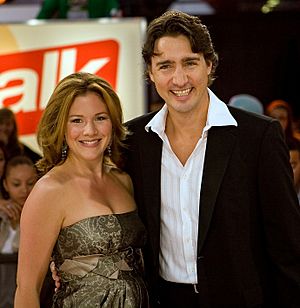 Trudeau first met Sophie Grégoire when they were both children growing up in Montreal; Grégoire was a classmate and childhood friend of Trudeau's youngest brother, Michel. They reconnected as adults in June 2003, when Grégoire, by then a Quebec television personality, was assigned as Trudeau's co-host for a charity ball; they began dating several months later. Trudeau and Grégoire became engaged in October 2004, and married on May 28, 2005, in a Roman Catholic ceremony at Montreal's Sainte-Madeleine d'Outremont Church. They have three children: Xavier James (born October 18, 2007), Ella-Grace Margaret (born February 5, 2009) and Hadrien Grégoire (born February 28, 2014).

In June 2013, two months after Trudeau became the leader of the Liberal Party, the couple sold their home in the Côte-des-Neiges neighbourhood of Montreal. They began living in a rented home in Ottawa's Rockcliffe Park, the neighbourhood near where Trudeau resided as a child during his father's time as prime minister.

On August 18, 2014, an intruder broke into the house while Grégoire and the couple's three children were sleeping and left a threatening note; however, nothing was stolen and there was no damage to the property. Following the incident, Trudeau, who was in Winnipeg at the time of the break-in, stated his intention to inquire with the Royal Canadian Mounted Police about his home security. After his 2015 electoral victory, Trudeau opted to live at Rideau Cottage, on the grounds of Rideau Hall, until necessary repairs are completed at 24 Sussex to make it comfortable for his family.

All content from Kiddle encyclopedia articles (including the article images and facts) can be freely used under Attribution-ShareAlike license, unless stated otherwise. Cite this article:
Justin Trudeau Facts for Kids. Kiddle Encyclopedia.