Stornoway is the name of the official residence of the Leader of the Official Opposition in Canada, and has been used as such since 1950. It is provided in recognition of the opposition leader's position. Located at 541 Acacia Avenue in the Rockcliffe Park area of Ottawa, Ontario. Stornoway has assessed value $4,225,000 (2008) (based on this value, which is only approximation of market value, the municipal property taxes are calculated) and is maintained with $70,000 a year in government funds. The property has been owned and managed by the National Capital Commission since April 1986. The lot size, with a frontage of 228 feet (69 m) and depth of 225 feet (69 m), is slightly irregular.

The property is 5.1 km (3.2 mi) from Ottawa's Parliament Buildings, whereas the Prime Minister's official residence is only 3.0 km (1.9 mi) away from Parliament. It is located in an area which contains many ambassadorial residences.

The house was built by architect Allan Keefer in 1914 for Ottawa grocer Ascanio J. Major and was given the name "Stornoway" by the second occupants, Irvine Gale Perley-Robertson and Ethel Lesa Perley, after the ancestral home of the Perley family in the Outer Hebrides in Scotland.

During the Second World War, from summer 1941 to 1945, Mrs. Perley-Robertson offered Stornoway to (then) Princess Juliana of the Netherlands as a temporary home-in-exile for the Dutch Royal Family, including the future Queen Beatrix of the Netherlands.

Stornoway has served its present role as the Official Opposition Leader's residence since 1950, when it was purchased by a group of concerned citizens and later transferred to the Government of Canada.

Although the Bloc Québécois were the official Opposition from 1993 to 1997, party leader Lucien Bouchard declined to move into the residence as a mark of protest against the federal government, choosing instead to live in nearby Gatineau, Quebec. His successor, Gilles Duceppe, also did not reside in Stornoway.

Following the 1997 election, when the Reform Party displaced the Bloc Québécois to become the largest opposition party, the new official Opposition Leader, Preston Manning, declined to move in for a different reason: he protested that it was too extravagant and a waste of taxpayers' money, even joking that it should be used as a bingo hall to pay off the national debt. Manning asked that he be provided with a more 'modest' residence, but soon moved into Stornoway after his refusal to do so began to be portrayed in the media as a mark of disrespect for his position as Leader of the Opposition.

Renovations from 2002 to 2006 included an overhaul of the living room and kitchen, repair of the chimney, replacement of carpets, refinishing of hardwood floors, and painting, among other things.

Jack Layton, who had led the NDP to official Opposition status in the May 2, 2011 election, moved in a month later, but stated that he would continue to live in Toronto when Parliament was out of session. He died on August 22 of cancer; it was subsequently revealed that Layton and his wife Olivia Chow actually spent just one night in the house. His interim successor as NDP leader, Nycole Turmel, also did not formally move into the house, though she used Stornoway for entertaining purposes and slept over on occasion.

Completed in 1914, the building had three occupants prior to its acquisition by the Government of Canada. Ascanio Joseph Major, a local grocer, was the original occupant of Stornoway, residing there from 1914 to 1923. In 1923, the Perley-Robertson family acquired the home. From 1941 to 1945, during the Second World War, the Dutch Royal Family leased the home from the Perley-Robertson family. 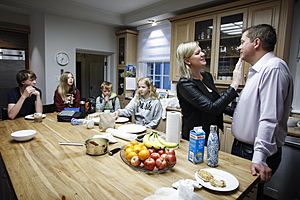 Andrew Scheer (right foreground) with his family in Stornoway's kitchen, in September 2019. He has resided in Stornoway from 2017 to 2020 as the Leader of the Official Opposition.

Besides the residents in the home, Stornoway is served by a staff of three: a chef, chauffeur, and household administrator. Like 24 Sussex and Rideau Cottage the public is not allowed to visit Stornoway.

All content from Kiddle encyclopedia articles (including the article images and facts) can be freely used under Attribution-ShareAlike license, unless stated otherwise. Cite this article:
Stornoway (residence) Facts for Kids. Kiddle Encyclopedia.