John Gilbert "Jack" Layton, PC (July 18, 1950 – August 22, 2011) was a Canadian politician and the Leader of the Official Opposition. He was the leader of the New Democratic Party from 2003 to 2011, and previously sat on Toronto City Council. He was the Member of Parliament for the constituency of Toronto—Danforth from 2004 until his death.

He was a son of Progressive Conservative cabinet minister Robert Layton (1925-2002). He was born in Montreal and raised in Hudson, Quebec. He rose to prominence in Toronto municipal politics where he campaigned tirelessly for the needs of ordinary citizens and for environmental issues. Eventually, he became head of the Federation of Canadian Municipalities. In 2003, he was elected leader of the NDP on the first ballot of the convention, and the NDP almost doubled its popular vote in the 2004 election.

Thirty seven NDP MPs were elected under Layton in the 2008 election. In the 2011 federal election, he led the NDP to a historic total of 103 seats and formed the Official Opposition. Although recovering from illness, Layton campaigned tirelessly, and inspired many people. Importantly, the NDP had increased its number of Quebec MPs from one to fifty-nine seats, almost eliminating the previous Bloc Québécois MPs.

Layton died at his home in Toronto on August 22, 2011, aged 61, after suffering from cancer. Layton's body had a lying-in-state before a state funeral was held in Toronto. He was married to fellow MP Olivia Chow. 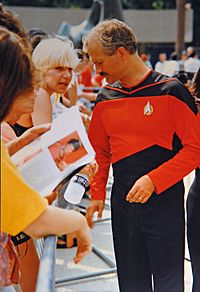 Layton's great-granduncle, William Steeves, was a Father of Confederation. His great-grandfather Philip E. Layton was a blind activist who founded the Montreal Association for the Blind in 1908 and led a campaign for disability pensions in the 1930s.

Jack Layton's grandfather, Gilbert Layton, was a cabinet minister in the Union Nationale government of Maurice Duplessis in Quebec. His father, Robert Layton, was a Liberal Party activist in the 1960s and 1970s.

Layton was known for playing music and singing songs at party gatherings. Alberta NDP Leader Brian Mason remembered during the three-day board meetings when Layton was running for president of the Federation of Canadian Municipalities: "He would gather people together in his hotel room and play the guitar and get everybody singing old folk songs from the 1960s. He just got people involved, just with his personality, not politics."

Layton was a keen Trekkie, having a custom Starfleet uniform made by a tailor. Layton was famously photographed wearing his uniform at a Star Trek convention in 1991.

On February 5, 2010, Layton announced that he had been diagnosed with prostate cancer. He noted that his father Robert Layton had the same type of cancer 17 years before and recovered from it. His wife, Olivia Chow, had thyroid cancer a few years before. He vowed to beat the cancer and said it would not interrupt his duties as member of Parliament or as leader of the NDP. 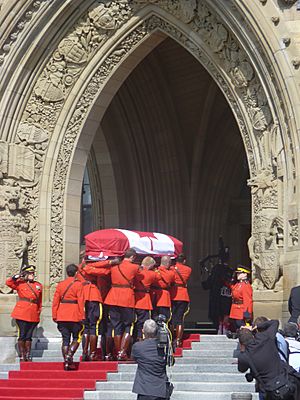 Following the 2011 federal election, Layton led the party into the first month of the new session of Parliament, as well as attending the NDP Federal Convention in Vancouver. After Parliament rose for the summer, Layton announced on July 25, 2011 that he would be taking a temporary leave from his post to fight an unspecified, newly diagnosed cancer. He was hoping to return as leader of the NDP upon the resumption of the House of Commons on September 19, 2011. 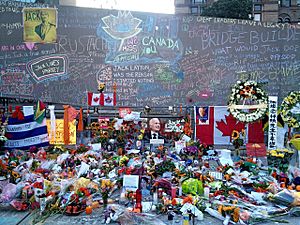 Upon hearing the news, there was a nationwide outpouring of grief. Layton's family released an open letter, written by Layton two days before his death. In it, he expressed his wishes regarding the NDP's leadership in the event of his death, and addressed various segments of the Canadian population, concluding, "My friends, love is better than anger. Hope is better than fear. Optimism is better than despair. So let us be loving, hopeful and optimistic. And we'll change the world."

Layton was accorded a state funeral by the Governor-General-in-Council, which took place between August 25 and 27, 2011, with the final memorial service at Roy Thomson Hall in Toronto. Layton was cremated following the funeral. A portion of his ashes was scattered under a jack pine planted on Toronto Island in his honour, with a second portion scattered at the Layton family's plot at Cote St. Charles United Church in Hudson, Quebec. A third portion was scattered under a memorial sculpted by Chow, placed at the Toronto Necropolis Cemetery on the first anniversary of his death.

All content from Kiddle encyclopedia articles (including the article images and facts) can be freely used under Attribution-ShareAlike license, unless stated otherwise. Cite this article:
Jack Layton Facts for Kids. Kiddle Encyclopedia.