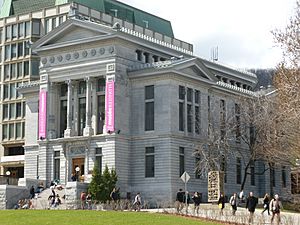 McGill University or just McGill is a university in Montreal, Canada. It was created in 1821, few years before the country Canada existed. McGill University does a lot of important research and has North America's first Museum, called Redpath Museum.

Many people think McGill University is one of the best universities in North America.

All content from Kiddle encyclopedia articles (including the article images and facts) can be freely used under Attribution-ShareAlike license, unless stated otherwise. Cite this article:
McGill University Facts for Kids. Kiddle Encyclopedia.