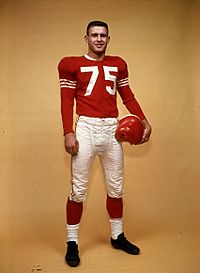 The Montreal Alouettes is a Canadian Football League team based in Montreal, Quebec. It is part of the CFL's East Division. It has won the league's Grey Cup championship seven times, the last time in 2010.

All content from Kiddle encyclopedia articles (including the article images and facts) can be freely used under Attribution-ShareAlike license, unless stated otherwise. Cite this article:
Montreal Alouettes Facts for Kids. Kiddle Encyclopedia.