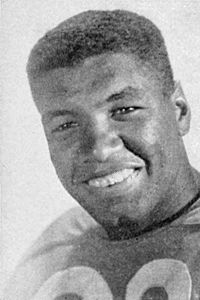 Marvin Luster (November 27, 1937 – May 25, 2020) was an American-Canadian professional football player. Luster was born in Shreveport, Louisiana. He played in the Canadian Football League (CFL) for fourteen years. He played college football for the UCLA Bruins.

Luster was selected originally by the Los Angeles Rams in the 1960 NFL Draft. He played as a defensive back for the Toronto Argonauts and Montreal Alouettes. He won the 1974 Grey Cup. He was a member of the Canadian Football Hall of Fame.

All content from Kiddle encyclopedia articles (including the article images and facts) can be freely used under Attribution-ShareAlike license, unless stated otherwise. Cite this article:
Marv Luster Facts for Kids. Kiddle Encyclopedia.