Matthews is a town in southeastern Mecklenburg County, North Carolina. It is a suburb of Charlotte. The population was 27,198 according to the 2010 Census.

The town was named for an early settler.

According to the United States Census Bureau, the town has a total area of 17.2 square miles (45 km2), all of it land. 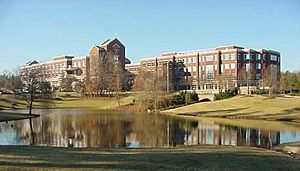 Matthews is twinned with:

Companies with headquarters in Matthews include:

Matthews is served by a branch of the Charlotte Mecklenburg Library. The library is located on the first floor of the Matthews Town Hall and is one of the most active in the system.

Matthews is home to professional soccer club Stumptown Athletic, named after the suburb's nickname. It was founded in 2019 and plays in US Soccer's third division, the National Independent Soccer Association. Its home stadium is the 5,000 capacity Sportsplex at Matthews.

All content from Kiddle encyclopedia articles (including the article images and facts) can be freely used under Attribution-ShareAlike license, unless stated otherwise. Cite this article:
Matthews, North Carolina Facts for Kids. Kiddle Encyclopedia.