Mecklenburg County is a county located on the border in the southwestern part of the state of North Carolina, in the United States. As of the 2010 census, the population was 919,628. It increased to 1,034,070 as of the 2015 estimate, making it the most populous county in North Carolina and the first county in the Carolinas to surpass 1 million in population. Its county seat and largest city is Charlotte.

On September 12, 2013, the county welcomed its one millionth resident.

The Mecklenburg Declaration of Independence was allegedly signed on May 20, 1775; if the document is genuine, Mecklenburg County was the first part of the Thirteen Colonies to declare independence from Great Britain. The "Mecklenburg Resolves" were adopted on May 31, 1775. Mecklenburg continues to celebrate the Meck Dec each year in May. The Date of the Meck Dec is also listed on the Flag of North Carolina, represented by the date of May 20, 1775 as one of two dates on the flag of the old North State.

In 1971, Mecklenburg County was the site of an important case in the American civil rights movement. Swann v. Charlotte-Mecklenburg Board of Education (CMS) was a suit filed to force the integration of the public schools in Charlotte.

In 1999, the Federal Courts effectively over-ruled the Swann decision and declared that the Charlotte-Mecklenburg Board of Education was 'Unitary' and were then prohibited by then US Federal Judge Robert Potter from using race to assign students to schools. In a case initially brought by William Capacchione, on behalf of his minor daughter, CMS was sued for not allowing his daughter into a nearby (or neighborhood) school. 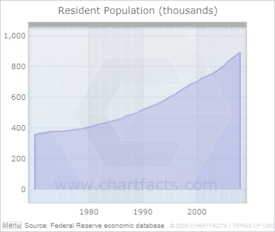 Mecklenburg County is a member of the regional Centralina Council of Governments.

The County is governed by the Mecklenburg Board of County Commissioners (BOCC). The BOCC is a nine-member board made up of representatives from each of the six county districts and three at-large representatives elected by the entire county. This electoral structure favors candidates in the at-large positions who will be elected by the majority population of the county. Each District has a population of approximately 165,000 individuals. All seats are partisan and are for 2-year terms (elections occur in even years). The current chairman of the Mecklenburg BOCC is Ella B. Scarborough (D, At-large). The Current Vice-Chair is Jim Puckett(R, District 1).

Members of the Mecklenburg County Commission are required by North Carolina State law to choose a Chair and Vice-Chair once a year (at the first meeting of December). Historically, the individual elected was the 'top-vote-getter' which was one of thee (3) at-large members. In 2014 this unofficial rule was changed by the Board to allow any member to serve as Chair or Vice-chair as long as they received support from 4 members plus their own vote.

The nine (9) members of the Board of County Commissioners are:

The current Chairman of the Charlotte-Mecklenburg School board is Mary T. McCray (At-Large). The Vice Chair is Ericka Ellis-Stewart (At-Large). The members of the Board of Education are:

The Charlotte-Mecklenburg School board is non-partisan, and staggered elections are held every two years (in odd years).

With twenty-five freight trains a day, Mecklenburg is a freight railroad transportation center, largely due to its place on the NS main line between Washington and Atlanta and the large volumes of freight moving in and out of the county via truck.

The Crescent train connects Charlotte with New York, Philadelphia, Baltimore, Washington, Charlottesville, and Greensboro to the north, and Atlanta, Birmingham and New Orleans to the south.

The Piedmont train connects Charlotte with Raleigh, Durham and Greensboro.

The Amtrak station is located at 1914 North Tryon Street. A new centralized multimodal train station, Gateway Station, has been planned for the city. It is expected to house the future LYNX Purple Line, the new Greyhound bus station, and the Crescent line that passes through Uptown Charlotte.

Mecklenburg County is the proposed southern terminus for the initial segment of the Southeast High Speed Rail Corridor operating between Charlotte and Washington, D.C. Currently in conceptual design, the SEHSR would eventually run from Washington, D.C. to Macon, Georgia.

Light rail service in Mecklenburg County is provided by LYNX Rapid Transit Services. Currently a 9.6-mile (15.4 km) line running from Uptown to Pineville; build-out is expected to be complete by 2034.

The vintage Charlotte Trolley also operates in partnership with CATS. On July 14, 2015, the Goldrush Streetcar was revived to operate in Uptown after several decades of absence. The line runs from Trade Street, near Charlotte Transportation and Convention Center, to Elizabeth Avenue. In addition to several restaurants, this line also serves Central Piedmont Community College and Novant Health Presbyterian Hospital. The city is applying for a $50,000,000 Federal Transportation Grant, to gain funding to construct expansion of a line to serve Johnson C. Smith University to the West and East along Central Avenue.

Mecklenburg's manufacturing base, its central location on the Eastern Seaboard, and the intersection of two major interstates in the county have made it a hub for the trucking industry. 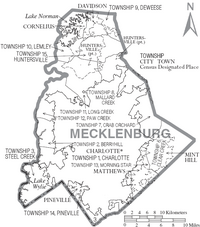 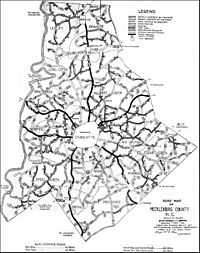 Mecklenburg County contains seven municipalities including the City of Charlotte and the towns of Cornelius, Davidson, and Huntersville (north of Charlotte); and the towns of Matthews, Mint Hill, and Pineville (south and southeast of Charlotte). Small portions of Stallings and Weddington are also in Mecklenburg County, though most of those towns are in Union County. Extraterritorial jurisdictions within the county are annexed by municipalities as soon as they reach sufficient concentrations.

All content from Kiddle encyclopedia articles (including the article images and facts) can be freely used under Attribution-ShareAlike license, unless stated otherwise. Cite this article:
Mecklenburg County, North Carolina Facts for Kids. Kiddle Encyclopedia.