Davidson is a suburban town located in northern Mecklenburg and Iredell counties, North Carolina, United States, on the banks of Lake Norman. It is a suburb in the Charlotte metropolitan area. The population was 10,944 at the 2010 census, and in 2019 the estimated population was 13,054. The town was founded in 1837 with the establishment of the Presbyterian Davidson College, named for Brigadier General William Lee Davidson, a local Revolutionary War hero. The land for Davidson College came from Davidson's estate, a large portion of which was donated by his son.

The history of the town of Davidson is inextricably linked to Davidson College, which predated the surrounding community and influenced its development. Although Davidson’s growth in the late nineteenth and early twentieth centuries typified small railroad towns throughout the Piedmont, the presence of the college created a unique village. The tree-shaded campus filled with classically inspired architecture distinguished Davidson from other communities. The sway of the school also extended beyond the campus to the entire town, influencing commerce, culture, and the character of its architecture. The 1869 Branson’s business directory recorded four dry goods merchants in the town as well as a cabinetmaker, a miller, and three physicians.

Soon after the arrival of the railroad, Davidson became a shipping point for cash crops, especially cotton, and a service center for farmers. In common with other railroad towns in the region, textile investors constructed cotton mills and mill villages along the rail corridor. The Linden Cotton Factory, erected in 1890 on Depot Street, was the first textile plant in Davidson, and in 1908, the Delburg Cotton Mills was constructed nearby. Two thousand bales of cotton were sold at Davidson annually in the early 1900s.

In 1891, the name of the town was changed from Davidson College to Davidson, emblematic of the community’s expanding roles for town and gown alike. Davidson’s cotton mills spurred the growth of the town, and by 1910, the population of Davidson reached 500 residents, climbing to 1,500 by the 1920s. Between 1900 and the Great Depression, the business district evolved from a commingling of stores and residences into contiguous rows of one- and two-story, brick commercial buildings. The heart of downtown – opposite the college – contained a full complement of small town stores and services, including four general merchandise stores, a drug store, a laundry, tailor shop, two barber shops, a hardware store, a post office, a bank, and several restaurants. Physicians, building contractors, and milliners also had Main Street addresses. Behind Main Street along the railroad tracks stood the small 1897 Southern Railway Depot, a livery, flour mill, sawmill, cotton gins, a cottonseed oil company, a blacksmith shop, and a buggy manufacturer.

The demise of cotton farming and decline of other agricultural pursuits in the region effectively ended the town’s role as a farming service center. Meanwhile, improved highways and the advent of I-77 encouraged residents to frequent larger department stores in the cities, especially Charlotte, twenty-two miles to the south. In more recent years, the emergence of suburban shopping centers around Davidson accelerated the town's status to an all-purpose retail market.

Today, the tremendous development around Charlotte has stimulated Davidson’s growth to its current population of more than 10,000 people. Local downtown businesses, now characterized by restaurants and specialty shops, cater to this new market. Prestigious, nationally known Davidson College has made Davidson an intellectual and cultural center, drawing into its orbit a sizable professional class.

Beginning with the General Plan in 1993, continuing through the Land Plan of 1995 and the Planning Ordinance of 2001, the town has advocated for and implemented smart growth principles, including pedestrian orientation (resulting in a ban on drive-thru’s), mixed-use development, affordable housing, open space preservation, and connectivity. An emphasis on design has been a consistent theme in each resulting regulatory document. Additionally, the Town of Davidson received National Register Historic District status in 2009 for the historic core of town, which includes downtown.

A view of Lake Norman in the spring.

There were approximately 2,429 family households, out of which 34.2% had children under the age of 18 living with them, 56.3% were married couples living together, 7.3% had a female householder with no husband present, 2.6% had a male householder with no wife present, and 33.8% were non-families. 26.4% of all households were made up of individuals, and 7.3% had someone living alone who was 65 years of age or older. The average household size was 2.4 and the average family size was 3.11.

The residents of Davidson attend the Charlotte-Mecklenburg Schools. Elementary schools include Davidson Elementary. Following the shutdown of Davidson IBMYP Middle School in 2011, there was no middle school located in Davidson for nearly 10 years. However, in recent years Davidson Elementary has been expanded to Davidson K-8, although some students leave to attend magnet, charter, or private schools. High school students attend William A. Hough High School in Cornelius. 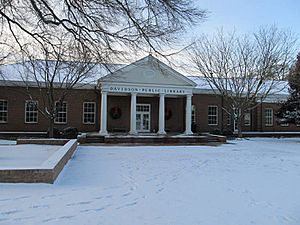 Davidson is home to Davidson College, a highly selective liberal arts college located in the heart of town on Main Street. Davidson College is ranked 15th in National Liberal Arts Colleges, and the top school in the South,. It is consistently ranked in the top ten best liberal arts colleges in the country, and has graduated 23 Rhodes scholars. Some notable attendees of the college are Woodrow Wilson, the 28th President of the United States, George Osborne, former British Chancellor of the Exchequer, and current NBA player Stephen Curry.

Davidson is served by a branch of the Public Library of Charlotte and Mecklenburg County. The library is located on the Green in Davidson.

All content from Kiddle encyclopedia articles (including the article images and facts) can be freely used under Attribution-ShareAlike license, unless stated otherwise. Cite this article:
Davidson, North Carolina Facts for Kids. Kiddle Encyclopedia.