Iredell County is a county located in the U.S. state of North Carolina. According to US Census projections in 2018, the population was 178,435. Its county seat is Statesville, and its largest town is Mooresville. The county was formed in 1788, subtracted from Rowan County. It is named for James Iredell, one of the first justices of the Supreme Court of the United States. Iredell County is included in the Charlotte–Concord–Gastonia, NC–SC Metropolitan Statistical Area, as defined in 2013 by the Office of Management and Budget with data from the U.S. Census Bureau.

Iredell County is located within the Piedmont Region of central North Carolina. The northwestern section of the county contains the Brushy Mountains, a deeply eroded spur of the Blue Ridge Mountains far to the west. The highest point in Iredell County, Fox Mountain, is in the Brushies; it rises to 1,760 feet. Although the "Brushies", as they are often called locally, are not high in the normal sense, they do rise prominently above the surrounding countryside. The remainder of Iredell County consists of gently rolling countryside occasionally broken by low hills and small river valleys. The county's largest river, the Catawba, forms much of its western border. Lake Norman, North Carolina's largest manmade lake, is the most prominent geographic feature of southern Iredell County; it is often called North Carolina's "inland sea".

Iredell County is an important transportation center for the state, as Interstate 77 and Interstate 40 cross in northeast Statesville. This has given birth to the county's slogan "Crossroads for the Future." Residents have easy access going south on I-77 to Charlotte; north on I-77 to Elkin, North Carolina and Roanoke, Virginia; east on I-40 to Winston-Salem, Greensboro and Raleigh; and west along I-40 to Hickory, North Carolina and Asheville.

The northern third of Iredell county is highly rural and contains no large towns. Due to the thinly populated nature of this portion of the state, it is one of the select places in North Carolina where the speed limit on Interstate Highways exceeds 65 mph, as Interstate 77 north of Statesville has a speed limit of 70 mph.

Iredell County is one of the longest counties in the state and stretches for nearly fifty miles north to south from Yadkin County in the north to Mecklenburg in the south. The county is divided into seventeen townships: Barringer, Bethany, Chambersburg, Concord, Coddle Creek, Cool Springs, Davidson, Eagle Mills, Fallstown, New Hope, Olin, Sharpesburg, Shiloh, Statesville, Turnersburg, Union Grove Harmony 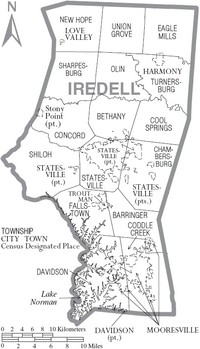 Farming is still a major source of income for many Iredell County residents. Dairy farming has been particularly popular in Iredell County since the early 1800s, in both the northern and southern sections of the county. However, the rapid population growth and development in southern Iredell County is putting increasing pressure on farmlands, and many farms in this section are giving way to shopping centers, housing developments, and large corporate office parks.

Iredell County is a major hub of NASCAR racing, with many race shops located in the county (mostly around Mooresville). Universal Technical Institute operates NASCAR Technical Institute under licensing agreements. The school offers racing-related instruction to prepare the student for their job search in the racing industry. Many NASCAR drivers live around Mooresville and Lake Norman. Although northern Iredell County has retained much of its rural character, the southern half of the county is experiencing rapid suburbanization and population growth, largely due to the immense popularity of the Lake Norman area for residents of nearby Charlotte, North Carolina's largest city.

Lowe's has its corporate headquarters in Mooresville.

The following schools were in the Iredell—Statesville School District as of 2018:

The following schools were in the Mooresville Graded School District, as of 2018:

The following current and historical institutions of higher education were located in Iredell County:

All content from Kiddle encyclopedia articles (including the article images and facts) can be freely used under Attribution-ShareAlike license, unless stated otherwise. Cite this article:
Iredell County, North Carolina Facts for Kids. Kiddle Encyclopedia.