Rowan County is a county in the U.S. state of North Carolina that was formed in 1753, as part of the British Province of North Carolina. It was originally a vast territory with unlimited western boundaries, but its size was reduced to 524 sq mi after several counties were formed from Rowan County in the 18th and 19th centuries, as population increased in the region. As of the 2010 census, its population was 138,428. Its county seat, Salisbury, is the oldest continuously populated European-American town in Western North Carolina.

Rowan County is located northeast of Charlotte, and is considered part of the Charlotte metropolitan area. Its population has increased as Charlotte has generated more industries and jobs.

The first Europeans to enter what is now Rowan County came with the Spanish expedition of Juan Pardo in 1567. They established a fort and a mission in the native village of Guatari, believed to be located near the Yadkin River and inhabited by the Wateree. At the time, the area was ruled by a female chief the Spaniards called Guatari Mico. The Spaniards called the village Salamanca in honor of the city of Salamanca in western Spain, and established a mission, headed by a secular priest named Sebastián Montero. The Spaniards abandoned the area at some point before 1572.

The county was formed in 1753 from the northern part of Anson County. It was named for Matthew Rowan, acting governor of North Carolina from 1753 to 1754. It was intended to incorporate all of the lands of the Granville District that had heretofore been included in Anson County.

The southern border is an east-west line that bisects the city of Kannapolis.

Interstate 85 passes through the county from southwest to northeast. In the early 2000s, I-85 underwent an extensive widening in the central and northern part of the county, from exit 68, US 29 Connector north almost to the Davidson county line. A new bridge over the Yadkin River is planned.

U.S. Route 70 enters the northwestern part of Rowan county, west of Cleveland. It runs southeast into Salisbury, where it follows Jake Alexander Boulevard to the southeast and then joins US 29 North as Main Street. US 70 continues northeast as Main Street and then Salisbury Avenue in Spencer before crossing into Davidson County.

U.S. Route 29 forms Main Street in Kannapolis, China Grove, and Landis in the southern part of the county. It joins US 70 as Main Street through Salisbury, and as Salisbury Avenue in Spencer.

U.S. Route 52 is the main artery for the southeastern part of the county, serving the towns of Gold Hill, Rockwell and Granite Quarry. Just before reaching downtown Salisbury, US-52 joins Interstate 85, which it follows into Davidson county. 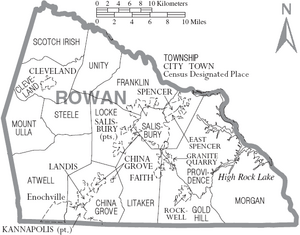 The Rowan–Salisbury School System is a PK-12 graded school district covering nearly all of Rowan County. The 35 schools in the district serve 20,887 students as of 2009–2010. It was formed in 1989 with the merger of Rowan County Schools and Salisbury City Schools.

Students living in the portion of Kannapolis located in Rowan County (the city is mostly in Cabarrus County) attend Kannapolis city schools. Their public school system operates independently of the countywide school systems.

County-wide notables include the following:

All content from Kiddle encyclopedia articles (including the article images and facts) can be freely used under Attribution-ShareAlike license, unless stated otherwise. Cite this article:
Rowan County, North Carolina Facts for Kids. Kiddle Encyclopedia.