Guilford County is a county located in the U.S. state of North Carolina. As of the 2010 census, the population was 488,406, making it the third-most populous county in North Carolina. Its seat is Greensboro. Since 1938, an additional county court has been located in High Point, North Carolina. The county was formed in 1771. 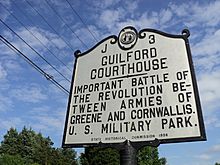 At the time of European encounter, the inhabitants of the area that became Guilford County were a Siouan-speaking people called the Saura. Beginning in the 1740s, settlers arrived in the region in search of fertile and affordable land. These first settlers included American Quakers from Pennsylvania, Maryland, and New England at what is now Greensboro, as well as German Reformed and Lutherans in the east, British Quakers in the south and west, and Scotch-Irish Presbyterians in the center of today's Guilford County. As population increased, the North Carolina colonial legislature organized the county in 1771, from parts of Rowan and Orange counties. It was named for Francis North, Earl of Guilford, father of Frederick North, Lord North, British Prime Minister from 1770 to 1782.

Friedens Church, whose name means "peace" in German, is in eastern Guilford County, at 6001 NC Hwy 61 North, northwest of Gibsonville. It is a historic church established by some of the earliest European settlers in this area. According to a church history, Rev. John Ulrich Giesendanner led his Lutheran congregation from Pennsylvania in 1740 into the part of North Carolina around Haw River, Reedy Fork, Eno River, Alamance Creek, Travis Creek, Beaver Creek, and Deep River. Friedens Church built a log structure in 1745, which the congregation used for 25 years. The second building, completed about 1771, was more substantial and was used for a century, being replaced in May 1871. That third building was destroyed by fire on January 8, 1939, with only the front columns surviving destruction. The church was rebuilt and reopened in May 1939.

The Quaker meeting also played a major role in the European settlement of the county. Numerous Quakers still live in the county. New Garden Friends Meeting, established in 1754 and first affiliated with a Pennsylvania meeting, still operates in Greensboro.

Alamance Presbyterian Church, a log structure, was built in 1762. The congregation was not officially organized until 1764 by the Rev. Henry Patillo, pastor of Hawfields Presbyterian Church. It has operated since then on the same site in present-day Greensboro. According to the church history, the congregation has built five churches on that site and now has its eighteenth pastor.

On March 15, 1781, during the American Revolution, the Battle of Guilford Court House was fought just north of present-day Greensboro between Generals Charles Cornwallis and Nathanael Greene. This battle marked a turning point in the Revolutionary War in the South. Although General Cornwallis, the British Commander, held the field at the end of the battle, his losses were so severe that he decided to withdraw to the Carolina coastline, where he could receive reinforcements at Wilmington and his battered army could be protected by the British Navy. His decision ultimately led to his defeat later in 1781 at Yorktown, Virginia, by a combined force of American and French troops and warships.

In 1779 the southern third of Guilford County was separated as Randolph County. In 1785, following the American Revolution, the northern half of its remaining territory was organized as Rockingham County.

In 1808, Greensboro replaced the hamlet of Guilford Court House as the county seat. It was more centrally located, making it a better location for travelers of the time.

In the antebellum era, many of the county's residents were opposed to slavery, including Lutherans, Quakers and Methodists. The county was a stop on the Underground Railroad, for which volunteers aided refugee slaves en route to freedom in the North. People gave them safe places to stay and often food and clothing. Levi Coffin, among the founders of the "railroad," was a Guilford County native. He is credited with personally helping more than 2,000 slaves escape to freedom before the war.

Education has long been a hallmark of the county, which founded "first" among its institutions. Guilford College was founded in 1837 as the New Garden Boarding School; its name was changed in 1888 when the academic program was expanded considerably. Guilford is the third-oldest coeducational institution in the country and the oldest such institution in the South. Greensboro College, established by the Methodist Church through a charter secured in 1838, is one of the oldest institutions of higher education for women in the United States.

Immanuel Lutheran College and Seminary was located on a small campus on East Market Street until it closed in 1961. "Lutheran" was founded by white ethnic German Lutherans for black students in 1903 in Concord, at a time when education was racially segregated and blacks had limited access to higher education. The school moved to the county seat of Greensboro in 1905, where Lutherans built a large granite main building for it. The school operated a high school, junior college, and seminary under the jurisdiction of the Evangelical Lutheran Synodical Conference of North America.

In 1911, a new county called Piedmont County was proposed, with High Point as its county seat, to be created from Guilford, Davidson and Randolph Counties. Many people appeared at the courthouse to oppose the plan, vowing to go to the state legislature to protest. The state legislature voted down the plan in February 1911.

In 1960 North Carolina still operated by racial segregation laws, and maintained the disenfranchisement of most black voters established at the end of the 19th century to suppress the Republican Party. It operated mostly as a one-party state dominated by conservative white Democrats. Following World War II, African-American veterans and young people heightened their activities in the American civil rights movement. Guilford County was the site of an influential protest in 1960 when four black students from the North Carolina A&T State University in Greensboro started an early sit-in. Known afterwards as the Greensboro Four, the four young men sat at a "whites-only" lunch counter at the Woolworth's store in downtown Greensboro and asked to be served after purchasing items in the store. When refused, they asked why their money was good enough for buying retail items, but not food at the counter. They were arrested, but their action led to many other college students in Greensboro - including white students from Guilford and the Women's College - to sit at the lunch counter in a show of support. The students carried on a regular sit-in and within two months, the sit-in movement spread to 54 cities in nine states; Woolworth's eventually agreed to desegregate its lunch counters, and other restaurants in Southern towns and cities followed suit.

The county is drained, in part, by the Deep and Haw Rivers. 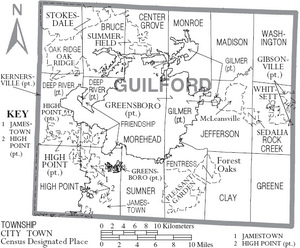 All content from Kiddle encyclopedia articles (including the article images and facts) can be freely used under Attribution-ShareAlike license, unless stated otherwise. Cite this article:
Guilford County, North Carolina Facts for Kids. Kiddle Encyclopedia.