The Battle of Guilford Court House was fought on March 15, 1781, during the American Revolutionary War, at a site which is now in Greensboro, the seat of Guilford County, North Carolina. A 2,100-man British force under the command of Lieutenant General Charles Cornwallis defeated Major General Nathanael Greene's 4,500 Americans. The British Army, however, suffered a considerable number of casualties during the battle (with estimates as high as 27% of their total force).

The battle was "the largest and most hotly contested action" in the American Revolution's southern theater.

After the battle, Greene moved into South Carolina, while Cornwallis chose to march into Virginia and attempt to link up with roughly 3,500 men under British Major General Phillips and American turncoat Benedict Arnold. These decisions allowed Greene to unravel British control of the South, while leading Cornwallis to Yorktown where he was eventually forced to surrender to General George Washington and French Lieutenant General Comte de Rochambeau.

Following the Battle of Cowpens, Cornwallis was determined to destroy Greene's army. However, the loss of his light infantry at Cowpens led him to burn his supplies, so that his army would be nimble enough for pursuit. He chased Greene in the Race to the Dan, but Greene escaped across the flooded Dan River to safety in Virginia. Cornwallis established a camp at Hillsborough, and attempted to forage supplies and recruit North Carolina's Tories. However, the bedraggled state of his army, and Pyle's massacre, deterred Loyalists. Meanwhile, Greene, having received reinforcements, decided to recross the Dan and challenge Cornwallis. On the 15th of March, the two armies met at Guilford Court House, North Carolina (within the present Greensboro, North Carolina), and a virtually drawn battle was fought.

The Action of the Battle 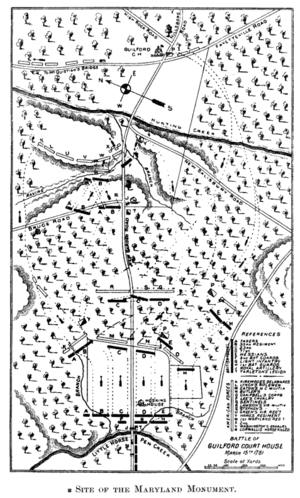 Hostilities opened on the morning of the 15th of March with a clash between advance guards near the Quaker New Garden Meeting House. With the arrival of the British 23rd Regiment of Foot, American Light Horse Harry Lee ordered a retreat to Greene's main body.

Greene had prepared his defense in three lines. North Carolina militia formed the fist line, with backwoods riflemen on the left and right flanks to pick off advancing British. In the second line, he placed the Vagina militia. His regulars comprised the last line. While superficially resembling the deployment successfully used by Daniel Morgan at Cowpens, the lines were hundreds of yards apart and could not support one another.

After a twenty-minute cannonade, Cornwallis began his attack around 1:30 PM. The British army forced its way through the first two lines, but with significant losses. However, the wooded terrain, the width of the battlefield, and uneven resistance hindered a coordinated advance, and British forces arrived piecemeal at the third line. At the climax of the battle, British Guards and American Continentals engaged in hand-to-hand combat. Lord Cornwallis, against the advice of his artillery officers, ordered grapeshot to be fired indiscriminately down onto the battlefield. While many British soldiers were killed, the Americans broke off and retreated from the field.

During the battle, Lord Cornwallis had a horse shot from under him. American Col. Benjamin Williams was later decorated for his personal bravery at Guilford Courthouse. 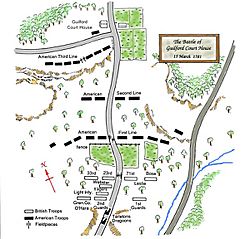 The British, by taking ground with their accustomed tenacity when engaged with superior numbers, were tactically victors, but were weakened by a loss of nearly 600 men. Seeing this as a classic Pyrrhic victory, British Whig Party leader and war critic Charles James Fox echoed Plutarch's famous words by saying, "Another such victory would ruin the British Army!"

Greene, cautiously avoiding another Camden, retreated with his forces intact. With his small army, less than 2000 strong, Cornwallis declined to follow Greene into the back country, and retiring to Hillsborough, North Carolina, raised the royal standard, offered protection to the inhabitants, and for the moment appeared to be master of Georgia and the two Carolinas. In a few weeks, however, he abandoned the heart of the state and marched to the coast at Wilmington, North Carolina, to recruit and refit his command.

At Wilmington, the British general faced a serious problem, the solution of which, upon his own responsibility, unexpectedly led to the close of the war within seven months. Instead of remaining in Carolina, he determined to march into Virginia, justifying the move on the ground that until Virginia was reduced he could not firmly hold the more southern states he had just overrun. This decision was subsequently sharply criticized by General Clinton as unmilitary, and as having been made contrary to his instructions.

The danger lay in the suddenly changed situation in that direction; as General Greene, instead of following Cornwallis to the coast, boldly pushed down towards Camden and Charleston, South Carolina, with a view to drawing his antagonist after him to the points where he was the year before, as well as to driving back Lord Rawdon, whom Cornwallis had left in that field. In his main object, the recovery of the southern states, Greene succeeded by the close of the year; but not without hard fighting and repeated reverses. "We fight, get beaten, and fight again," were his words.

On April 25, 1781 he was surprised in his camp at Hobkirk's Hill, near Camden, by Lord Rawdon, and was defeated, both sides suffering about an equal loss.

Interesting facts about the Battle of Guilford Court House 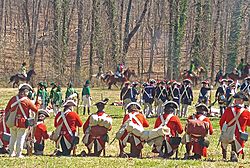 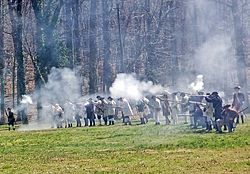 Every year, on or about March 15, re-enactors in period uniforms present a tactical demonstration of Revolutionary War fighting techniques on or near the battle site, major portions of which are preserved in the Guilford Courthouse National Military Park, established in 1917. Recent research has shown that the battlefield extended into the area now within the boundaries of the adjacent Greensboro Country Park to the east.

Three current Army National Guard units (116th IN, 175th IN and 198th SIG) are derived from American units that participated in the Battle of Guilford Courthouse. There are only thirty Army National Guard and active Regular Army units with lineages that go back to the colonial era.

On Sunday, March 13, 2016, a Crown Forces Monument was opened at the Guilford Courthouse National Military Park in honor of the officers and men of Cornwallis's army.

The town of Gilford, New Hampshire, despite a clerical error in the spelling, is named after the battle. A New Hampshire historical marker there, number 118, commemorates the naming.

All content from Kiddle encyclopedia articles (including the article images and facts) can be freely used under Attribution-ShareAlike license, unless stated otherwise. Cite this article:
Battle of Guilford Court House Facts for Kids. Kiddle Encyclopedia.