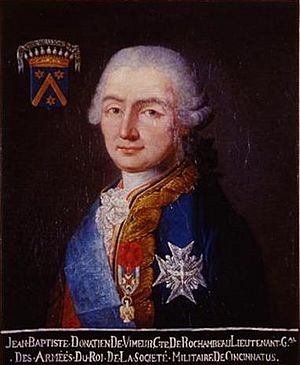 Jean-Baptiste Donatien de Vimeur, comte de Rochambeau (1 July 1725 – 10 May 1807) was a French nobleman. He served as a general under Louis XIV, and took part in the War of the Austrian Succession (1740-48). He was present at the siege of Antwerp and Namur. With an army of 6,000 people, he helped George Washington in the American Revolutionary War (1775-83). During the Reign of Terror, he was sentenced, but not executed on the guillotine. He was freed after the fall of Maximilien de Robespierre. Napoleon awarded him a title of the Legion of Honor, in 1803.