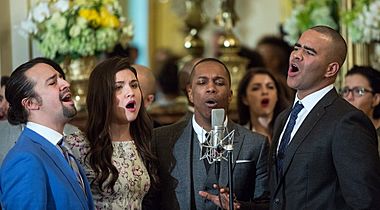 Hamilton: An American Musical is a sung-and-rapped-through musical by Lin-Manuel Miranda. It tells the story of American Founding Father Alexander Hamilton. Miranda said he was inspired to write the musical after reading the 2004 biography Alexander Hamilton by Ron Chernow. The show draws heavily from hip hop, as well as R&B, pop, soul, and traditional-style show tunes. It casts non-white actors as the Founding Fathers and other historical figures. Miranda described Hamilton as about "America then, as told by America now".

From its opening, Hamilton received critical acclaim. It premiered Off-Broadway on February 17, 2015, at the Public Theater, where its several-month engagement was sold out. The musical won eight Drama Desk Awards, including Outstanding Musical. It then transferred to the Richard Rodgers Theatre on Broadway, opening on August 6, 2015, where it received uniformly positive reviews and high box office sales. At the 2016 Tony Awards, Hamilton received a record-breaking 16 nominations and won 11 awards, including Best Musical. It received the 2016 Pulitzer Prize for Drama.

The orphan Alexander Hamilton experiences a hard early life, and through his smarts, leaves his home, the island of Nevis ("Alexander Hamilton"). In New York in 1776, Hamilton meets Aaron Burr, John Laurens, Marquis de Lafayette, and Hercules Mulligan ("Aaron Burr, Sir"), and impresses them with his rhetorical skills ("My Shot"). The latter three and Hamilton affirm their revolutionary goals to each other, while Burr remains apprehensive ("The Story of Tonight"). Later, the daughters of the wealthy Phillip Schuyler—Angelica, Eliza, and Peggy—go into town and share their opinion on the upcoming revolution ("The Schuyler Sisters"); it is at this time that Samuel Seabury warns everyone about the dangers of Congress while Hamilton disagrees and counters Seabury ("Farmer Refuted"), until King George III insists on his authority ("You'll Be Back"). During the New York and New Jersey campaign, Hamilton accepts a position as George Washington's aide-de-camp despite longing for field command ("Right Hand Man").

At a ball hosted by Phillip Schuyler ("A Winter's Ball"), Eliza falls hopelessly in love with Hamilton, who reciprocates her feelings to the point of marriage ("Helpless"), as Angelica suppresses her own feelings for the sake of their happiness ("Satisfied"). After the wedding, Burr and Hamilton congratulate each other's successes ("The Story of Tonight (Reprise)") while Burr reflects on Hamilton's swift rise while considering his own more cautious career ("Wait For It").

As conditions worsen for the Continental Army ("Stay Alive"), Hamilton aids Laurens in a duel against Charles Lee, who had insulted Washington ("Ten Duel Commandments"). Laurens injures Lee, who yields, while Hamilton is temporarily suspended by Washington over the duel and is sent home ("Meet Me Inside"). There, Eliza reveals that she is pregnant with her first child, Philip, and asks Hamilton to slow down to take in what has happened in their lives ("That Would Be Enough"). After Lafayette persuades France to get involved on the colonists' side, he urges Washington to call Hamilton back to help plan the final Battle of Yorktown; Washington agrees ("Guns and Ships") but explains to Hamilton—who is convinced he should die a martyr and a hero in war—that he should be careful with his actions because whatever he does will be known for ages to come ("History Has Its Eyes on You"). At the Battle of Yorktown, Hamilton meets up with Lafayette to take down the British, revealing that Mulligan was recruited as a spy, helping them figure out how to trap the British and win the war ("Yorktown (The World Turned Upside Down)").

Soon after the victory at Yorktown, King George asks the newborn America how it will succeed on its own ("What Comes Next?"), while Lafayette returns to France with plans to inspire his people to have their own revolution. Hamilton's son Philip is born, while Burr has a daughter, Theodosia, and the two tell their children how they will do anything to protect them ("Dear Theodosia"). Hamilton receives word that his long-time friend John Laurens has been killed in a seemingly pointless battle after the war was won and throws himself into his work ("Tomorrow There'll Be More of Us"). He co-authors The Federalist Papers and is selected as Secretary of the Treasury by newly elected President Washington, amidst Eliza begging Hamilton to stay and Angelica moving to London with her new husband ("Non-Stop").

Thomas Jefferson returns to America from being the U.S. ambassador to France, taking up his newfound position as Secretary of State, with friend and fellow Cabinet member, James Madison ("What'd I Miss"). In 1789, Jefferson and Hamilton debate Hamilton's financial proposals at a Cabinet meeting. Washington tells Hamilton to figure out a compromise to win over Congress ("Cabinet Battle #1").

Eliza and her family—along with Angelica, back from London—travel upstate during the summer, while Hamilton stays home to work on the compromise ("Take a Break"). Hamilton begins an affair with Maria Reynolds, making him vulnerable to her husband's blackmail ("Say No To This"). Hamilton, Jefferson, and Madison create the Compromise of 1790 over a private dinner, exchanging Hamilton's financial plan for placing the country's permanent capital on the Potomac River. Burr is envious of Hamilton's sway in the government and wishes he had similar power ("The Room Where It Happens"). Burr switches political parties and defeats Philip Schuyler, making Hamilton now a rival ("Schuyler Defeated").

In another Cabinet meeting, Jefferson and Hamilton argue over whether the United States should assist France in its conflict with Britain. President Washington ultimately agrees with Hamilton's argument for remaining neutral ("Cabinet Battle #2"). In the wake of this, Jefferson, Madison, and Burr decide to join forces to find a way to discredit Hamilton ("Washington on Your Side"). Washington decides to retire from the presidency, and Hamilton assists in writing a farewell address ("One Last Time").

A flabbergasted King George receives word that George Washington has stepped down, and will be replaced by Paris signatory John Adams ("I Know Him"). Adams becomes the second President and fires Hamilton, who, in response, publishes an inflammatory critique of the new president ("The Adams Administration"). Jefferson, Madison, and Burr confront Hamilton about James Reynolds' blackmail, accusing him of "[embezzlement of] government funds", which forces Hamilton to reveal his affair with Maria ("We Know"). Out of fear that the affair will be used against him in his political career, Hamilton chooses to publicize his affair ("Hurricane") in the Reynolds Pamphlet, causing uproar in his political position ("The Reynolds Pamphlet") and damaging his relationship with Eliza, who, in a heartbroken retaliation, burns all the letters Hamilton wrote her, trying to erase herself from history ("Burn"). After graduating college, Philip attempts to defend his father's honor in a duel with George Eacker ("Blow Us All Away") but is fatally shot ("Stay Alive (Reprise)"), causing a reconciliation between Alexander and Eliza ("It's Quiet Uptown").

Hamilton's endorsement of Jefferson in the 1800 election ("The Election of 1800") results in further animosity between Hamilton and Burr, who challenges Hamilton to a duel via an exchange of letters ("Your Obedient Servant"). Hamilton writes his last letter in a rush while Eliza tells him to go back to bed ("Best of Wives and Best of Women"). Burr and Hamilton travel to New Jersey for the duel. Burr reflects on the moments leading up to the duel, stating that one of them will have to die. Burr and Hamilton walk the requisite ten paces, with Burr firing first, and time freezes as Hamilton reflects on his legacy, before throwing away his shot. Burr shoots him between the ribs and Hamilton eventually dies, mourned upon by Eliza, Angelica, and the rest of the cast. Burr laments that though he survived, he is cursed to be remembered as the villain who killed Hamilton ("The World Was Wide Enough").

The musical closes with a reflection on historical memory. Jefferson and Madison reflect on Hamilton's legacy, as Eliza tells how she keeps Hamilton's legacy alive through interviewing war veterans, getting help from Angelica, raising funds for the Washington Monument, speaking out against slavery, and establishing the first private orphanage in New York City ("Who Lives, Who Dies, Who Tells Your Story"). As the musical ends, Eliza looks in the direction of the audience and lets out a tearful gasp.

‡ Blankenbuehler received a Special Drama Desk Award for "his inspired and heart-stopping choreography in Hamilton, which is indispensible [sic] to the musical's storytelling. His body of work is versatile, yet a dynamic and fluid style is consistently evident. When it's time to 'take his shot,' Blankenbuehler hits the bulls-eye."

The musical currently holds the record for most Tony Award nominations with 16 nominations (though due to multiple nominations in the two 'actor' categories, it could have only won 13 awards). At 11 wins, the musical fell short of one more win to match the record of 12 held by The Producers.

All content from Kiddle encyclopedia articles (including the article images and facts) can be freely used under Attribution-ShareAlike license, unless stated otherwise. Cite this article:
Hamilton (musical) Facts for Kids. Kiddle Encyclopedia.