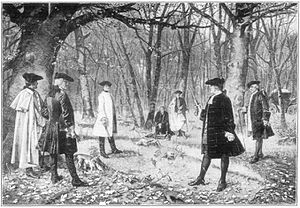 The Burr–Hamilton duel was a duel fought between two well-known American politicians. It was between the former secretary of the treasury Alexander Hamilton and sitting vice president Aaron Burr. It took place on July 11, 1804. The duel was caused by a long and bitter rivalry between the two men. At Weehawken, in New Jersey, Burr shot and wounded Hamilton. Hamilton was carried to the home of William Bayard on the Manhattan shore, where he died the next day. The duel ended Burr's political career.

All content from Kiddle encyclopedia articles (including the article images and facts) can be freely used under Attribution-ShareAlike license, unless stated otherwise. Cite this article:
Burr–Hamilton duel Facts for Kids. Kiddle Encyclopedia.