Sonia Sotomayor (born: June 25, 1954) is a United States Supreme Court justice. She has been on the Court since 2009, and was on a lower court before that. When on the lower court, she ended the 1994 baseball strike.

She is the first and only Latina (hispanic women) on the Court. Sotomayor is Puerto Rican and is from the Bronx. 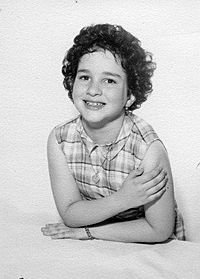 Sotomayor as a young girl

Sotomayor was born in New York City to parents who were from Puerto Rico. As a child, she was interested in reading the Nancy Drew series and other detective stories. She had a rough childhood since her alcoholic father died when she was nine. Throughout her time in high school and at Princeton, Sotomayor was a charismatic and inspirational leader.

She graduated Princeton with a history degree, went to Yale University to study law and then served as a U.S District Court judge and judge for U.S Court of Appeals for the Second Circuit. 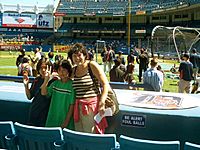 Sotomayor with her nephews at Yankee Stadium in 2007

Sotomayor long lived in Greenwich Village in New York City and had few financial assets other than her home. She enjoys shopping, traveling, and giving gifts and helps support her mother and her mother's husband in Florida.

She maintains ties with Puerto Rico, visiting once or twice a year, speaking there occasionally, and visiting cousins and other relatives who still live in the Mayagüez area. She has long stressed her ethnic identity, saying in 1996, "Although I am an American, love my country and could achieve its opportunity of succeeding at anything I worked for, I also have a Latina soul and heart, with the magic that carries." 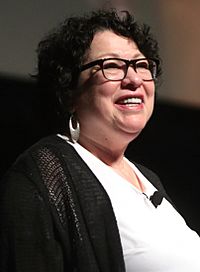 Sotomayor at the 2017 John P. Frank Memorial Lecture at Arizona State University as the guest of honor.

She was elected a member of the American Philosophical Society in 2002. She was given the Outstanding Latino Professional Award in 2006 by the Latino/a Law Students Association. In 2008, Esquire magazine included Sotomayor on its list of "The 75 Most Influential People of the 21st Century". In 2013, Sotomayor won the Woodrow Wilson Award at her alma mater Princeton University.

In 2013, a painting featuring her, Sandra Day O'Connor, Ruth Bader Ginsburg, and Elena Kagan was unveiled at the Smithsonian's National Portrait Gallery in Washington, D.C. According to the Smithsonian at the time, the painting was on loan to the museum for three years.

In May 2015 she received the Katharine Hepburn medal from Bryn Mawr College. The Katharine Hepburn Medal recognizes women who change their worlds: those whose lives, work, and contributions embody the intelligence, drive, and independence of the four-time Oscar winner and her namesake mother, an early feminist activist.

All content from Kiddle encyclopedia articles (including the article images and facts) can be freely used under Attribution-ShareAlike license, unless stated otherwise. Cite this article:
Sonia Sotomayor Facts for Kids. Kiddle Encyclopedia.