Kamala Devi Harris (born October 20, 1964) is an American politician and lawyer. She is the 49th and current Vice President of the United States. She served as a United States senator from California from 2017 until 2021. Before she took the position of senator, Harris was the State Attorney General from 2011 to 2017.

Harris was elected California's Attorney General in 2010 and reelected in 2014. On November 8, 2016, she defeated Loretta Sanchez in the 2016 Senate election to succeed outgoing Senator Barbara Boxer, becoming California's third female U.S. Senator and the first of either Indian or Jamaican descent.

On January 21, 2019, Harris announced her candidacy for President of the United States in the 2020 election. She ended her campaign on December 3, 2019.

On November 7, 2020, the race was called in favor of the Biden-Harris ticket. She will be the second vice president of significant non-European ancestry, following Charles Curtis, who served from 1929 to 1933 alongside President Herbert Hoover. Harris is also be the first African American, the first Asian American, and the first female vice president in U.S. history. 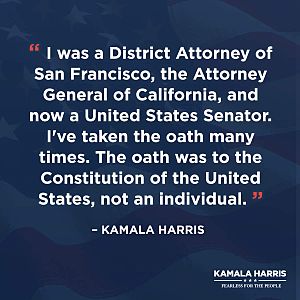 Her name, Kamala, comes from the Sanskrit word for lotus. Her family lived in Berkeley, California, where both of Harris' parents attended graduate school. Harris grew up going to both a black Baptist Church and a Hindu temple. She has one younger sister, Maya. They both sang in a Baptist choir.

Harris' parents divorced when she was 7, and her mother was granted custody of the children by court-ordered settlement. After the divorce, her mother Shyamala moved with the children to Montreal, Québec, Canada, where she accepted a position doing research at Jewish General Hospital and teaching at McGill University.

After graduating from Montreal's Westmount High School in Quebec, Kamala attended Howard University in Washington, D.C., where she majored in political science and economics. Harris returned to California, earning her Juris Doctor (J.D.) from the University of California, Hastings College of the Law, in 1989. 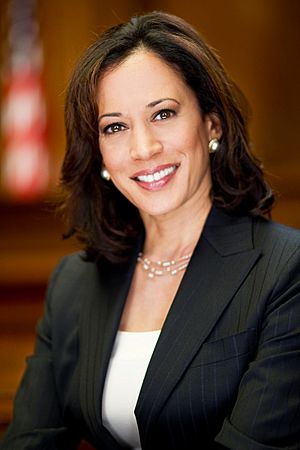 She worked as the Attorney General of California until 2017 when she became a senator for California.

On August 11, 2020, Biden picked Harris as his running mate. On November 7, the Biden-Harris ticket beat the Trump-Pence ticket making her the Vice President-elect. She is the first woman, the first Asian-American, and the first African-American Vice President. 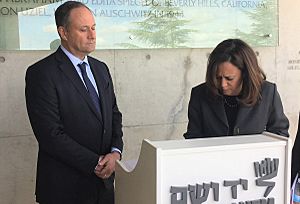 Harris is married to California attorney Douglas Emhoff, who was at one time partner-in-charge at Venable LLP's Los Angeles office. They married on August 22, 2014, in Santa Barbara, California.

Kamala and Douglas do not have children together, but Harris is stepmother, "Momala", to Douglas's two children from his previous marriage. 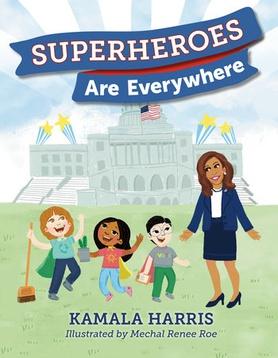 Superheroes Are Everywhere is a children's book written by Kamala Harris and illustrated by Mechal Renee Roe. It was published on January 8, 2019.

The book teaches that superheroes can be found everywhere in real life, from family members, to friends, to teachers at school and college, based upon the author's life.

Harris has written two non-fiction books and one children's book.

All content from Kiddle encyclopedia articles (including the article images and facts) can be freely used under Attribution-ShareAlike license, unless stated otherwise. Cite this article:
Kamala Harris Facts for Kids. Kiddle Encyclopedia.