Harris was born in Champaign–Urbana, Illinois, and was educated at Bishop O'Dowd High School, the University of California, Berkeley, and Stanford University. She was involved with PolicyLink, the American Civil Liberties Union, and the Center for American Progress.

Maya Lakshmi Harris was born in Champaign-Urbana, Illinois, and grew up in the San Francisco Bay Area and Montreal, Quebec. She is a daughter of Shyamala Gopalan Harris (1938–2009), a breast cancer researcher who emigrated from Chennai (formerly Madras), India in 1960; and Donald Harris, a Jamaican-born Stanford University economics professor, now emeritus. Her maternal grandfather, P. V. Gopalan was a career civil servant with federal Government of India. She and her older sister, Kamala, were raised with beliefs from Baptist and Hindu faiths. At 17, she gave birth to her only child, Meena Harris. She received her Bachelor of Arts degree from the University of California, Berkeley in 1989. That year, she enrolled in Stanford Law School. While at Stanford, she was an editor of the Stanford Law Review, and active with the East Palo Alto Community Law Project, serving as Co-Coordinator of the Domestic Violence Clinic and Co-Chair of the Student Steering Committee. She received her J.D. degree in 1992 "with distinction."

Harris served as an adjunct law professor at the University of San Francisco School of Law. She also taught gender discrimination at U.C. Hastings College of the Law and contract law at New College of California School of Law and was Dean at Lincoln Law School of San Jose.

She was later appointed Dean and Chief Executive Officer of Lincoln Law School of San Jose. At 29, she was one of the youngest law school deans ever in the United States, and the only Black woman at the time. 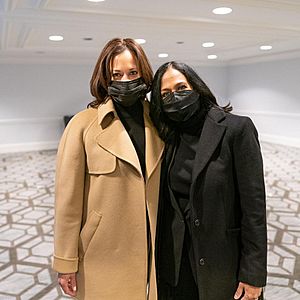 Harris was a Senior Associate at PolicyLink, a national research and action institute dedicated to advancing economic and social equity. In that capacity, she organized conferences around police-community relations and advocated for police reform, authoring two national publications.

Harris served as Executive Director of the Northern California American Civil Liberties Union. She was the first Jamaican American to lead the ACLU of Northern California and the first South Asian executive director of an ACLU affiliate. In her role as the head of the largest affiliate office of the ACLU, Harris directed and coordinated litigation, media relations, lobbying, and grassroots organizing work. She earlier served as the affiliate's Racial Justice Project Director, establishing priorities including eliminating racial disparities in the criminal justice system and achieving educational equity in California public schools. In 2003, Harris was the Northern California director for No on 54, the successful campaign to defeat Proposition 54, which sought to ban state agencies from collecting racial and ethnic data. In 2006, she was the lead attorney in League of Women Voters of California v. McPherson, a case which restored voting rights to over 100,000 Californians in county jails on probation from felony convictions.

In 2008, Harris was appointed Vice President for Democracy, Rights and Justice at the Ford Foundation. The program focused on promoting effective governance, increasing democratic participation, and protecting and advancing human rights worldwide, and she led a global team in making grants of over $150 million annually.

Harris was a Senior Associate at PolicyLink. From 2008 until 2013, Harris was Vice President for Democracy, Rights and Justice at the Ford Foundation. Prior to joining the Ford Foundation, she served as the Executive Director of the American Civil Liberties Union (ACLU) of Northern California, the largest ACLU affiliate in the country. Harris was formerly a senior fellow at the Center for American Progress and a Visiting Scholar at Harvard Law School. She was a political and legal analyst for MSNBC from 2017 until 2018,

As Clinton's campaign representative to the Democratic Party Platform Committee, Harris helped draft the 2016 platform. Harris served as campaign chairwoman for her sister's 2020 campaign for president until the campaign's suspension.

Harris authored the essay "Fostering Accountable Community-Centered Policing", which appeared in the 2006 book The Covenant with Black America. She was also a contributing author to The Shriver Report: A Woman's Nation Pushes Back from the Brink, publishing the essay "The Gender Wage Gap: A Civil Rights Issue for Our Time."

Harris has authored publications which include, Community-Centered Policing: A Force for Change, a report highlighting community-centered policing practices nationwide, and Organized for Change: The Activist's Guide to Police Reform, an advocacy manual for police reform. In 2008, Harris published Making Every Vote Count: Reforming Felony Disenfranchisement Policies and Practices in California. In 2014, she authored Women of Color: A Growing Force in the American Electorate.

In 2020, Harris wrote in The Atlantic and Women's Health Magazine about living with the chronic illness lupus.

In 1997, the Young Lawyers Division of the National Bar Association honored her with the Junius W. Williams Young Lawyer of the Year Award. The following year, she was named one of the Top 20 Up and Coming Lawyers Under 40 by the San Francisco Daily Journal.

In 2006, Harris was named one of 10 notable Desis of the year. She was awarded the Women Who Dare Award from Girls, Inc. in 2008. In 2009, Harris was named to the first class of The Root 100, celebrating the "leadership, service and excellence of African-American men and women whose passion, dedication and innovative work have set them apart." She was presented with the Champion of Justice Award from Equal Rights Advocates in 2014, an award given annually to a hero in the movement for gender equality.

Harris has been married to Tony West since July 1998. Maya and Tony were both in the class of 1992 at Stanford Law School, where they became friends but did not start a relationship until after graduation. Her daughter Meena Harris graduated from Stanford in 2006 and from Harvard Law School in 2012. Her sister Kamala Harris is the Vice President of the United States.

In 2020, Harris revealed she had been diagnosed with lupus at the age of 22.

All content from Kiddle encyclopedia articles (including the article images and facts) can be freely used under Attribution-ShareAlike license, unless stated otherwise. Cite this article:
Maya Harris Facts for Kids. Kiddle Encyclopedia.