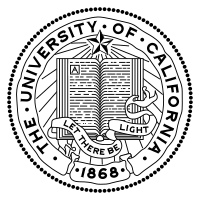 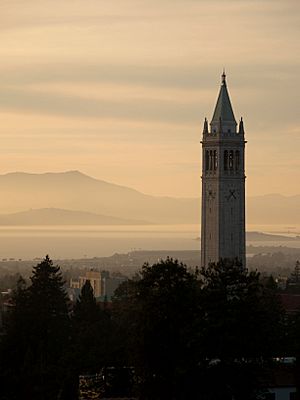 Sather Tower looking out over the San Francisco Bay and Mount Tamalpais.

The University was founded in 1868 when the private College of California and the public Agricultural, Mining, and Mechanical Arts College merged. Berkeley was a founding member of the Association of American Universities and 61 Nobel Laureates have been affiliated with the university as faculty, researchers and alumni. Berkeley physicists worked on the Manhattan Project during World War II and the university now manages the nation's two principal nuclear weapons laboratories: Lawrence Berkeley National Laboratory and Los Alamos National Laboratory.

Berkeley student-athletes compete intercollegiately as the California Golden Bears. A member of both the Pacific-12 Conference and the Mountain Pacific Sports Federation in the NCAA, Cal students have won national titles in many sports, including football, men's basketball, baseball, softball, water polo, rugby and crew. In addition, they have won over 100 Olympic medals. The official colors of the university and its athletic teams are Berkeley blue and California gold.

All content from Kiddle encyclopedia articles (including the article images and facts) can be freely used under Attribution-ShareAlike license, unless stated otherwise. Cite this article:
University of California, Berkeley Facts for Kids. Kiddle Encyclopedia.