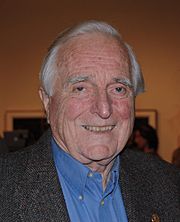 Engelbart was born on January 30, 1925 in Portland, Oregon. He studied at Oregon State College and at the University of California, Berkeley. Engelbart was married to Ballard Engelbart from 1950 until her death in 1997. They had four children. Engelbart died on July 2, 2013 from kidney failure in Atherton, California, aged 88.

All content from Kiddle encyclopedia articles (including the article images and facts) can be freely used under Attribution-ShareAlike license, unless stated otherwise. Cite this article:
Douglas Engelbart Facts for Kids. Kiddle Encyclopedia.