The National Inventors Hall of Fame (NIHF) is an American not-for-profit organization which recognizes individual engineers and inventors who hold a U.S. patent of highly significant technology. Founded in 1973, its primary mission is to "honor the people responsible for the great technological advances that make human, social and economic progress possible." Besides the Hall of Fame, it also operates a museum in Alexandria, Virginia, and a former middle school in Akron, Ohio, and sponsors educational programs, a collegiate competition, and special projects all over the United States to encourage creativity among students.

As of 2020, 603 inventors have been inducted, mostly constituting historic persons from the past three centuries, but including about 100 living inductees. An NIHF committee chooses an annual inductee class in February from nominations accepted from all sources. Nominees must hold a U.S. patent of significant contribution to the U.S. welfare, and which advances science and useful arts. The 2020 class included 22 inventors.

At first, the Hall was housed in the U.S. Patent and Trademark Office in Washington, D.C., near the Washington National Airport but it soon needed more room at a more prominent location. A committee was formed in 1986 to find a new home for it. For a time, the Franklin Institute in Philadelphia, Pennsylvania, was the frontrunner. But in 1987, a patent attorney from Akron, Edwin "Ned" Oldham, the representative from the National Council of Patent Law Associations, led the drive to move the Hall to Akron. According to Maurice H. Klitzman, one of the founding members of the Board of Directors, because of the guaranteed financial support by the city of Akron that greatly exceeded any other community's proposal, the Board selected Akron as the new home. The construction of the new building was finished in 1995 and the Hall opened to the public with the name of the Inventure Place.

From the beginning, the Inventure Place was intended to be more than a science and technology museum and library. It was designed to double as an inventor's workshop and a national resource center for creativity. Designed by an architect from New York City, James Stewart Polshek, it was a stainless-steel building, shaped like a curving row of white sails, with five tiers of exhibits. One of the exhibits allowed the visitors to use computer programs for making animations and mechanisms for running laser-light shows.

But attendance did not meet the expectations and the museum never made a profit, although its related ventures and programs, such as Invent Now and Camp Invention, proved to be more successful. In 2002, its name was changed to the National Inventors Hall of Fame Museum. Six years later the Hall moved to Alexandria. Its former facility was converted to a specialty school for students in grades between 5th and 8th. It is now the National Inventors Hall of Fame STEM Middle School, a middle school for the Akron Public Schools. 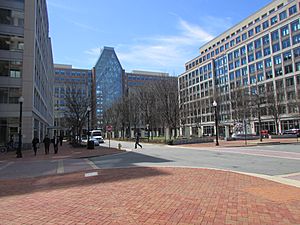 In Alexandria, the National Inventors Hall of Fame operates a museum in the U.S. Patent and Trademark Office building at 600 Dulany Street, with a gallery of digital portraits of the honorees, interactive kiosks and a theater. Admission is free.

In addition to the exhibits of the artifacts and documents from the collections of the Patent and Trademark Office, it also promotes future generations of inventors by sponsoring the Invent Now Kids program, Camp Invention, Club Invention and the Collegiate Inventors Competition as well as, with national partners, many ventures and special projects.

Camp Invention, founded in 1990, is a daytime summer camp for children, with program sites in 49 states. Camp Invention is the only nationally recognized summer program focused on creativity, innovation, real-world problem solving and the spirit of the invention.

The Collegiate Inventors Competition was created in 1990 to encourage college and university students to be creative and innovative with science, engineering and technology for dealing with the problems of the world. Since then, with the help from the sponsors, it has awarded more than $1 million to the winning students in two categories, undergraduate and graduate. In 2012, the first places were won with a delivery therapy for treating cancer and a way to facilitate suturing in abdominal surgery. Other finalists included the use of CT scanning and 3-D printing technology to replicate an amputee's lost hand, a low-profile shoulder brace that can be applied by the athletes themselves, and an electric motorcycle that runs on spheres instead of wheels.

All content from Kiddle encyclopedia articles (including the article images and facts) can be freely used under Attribution-ShareAlike license, unless stated otherwise. Cite this article:
National Inventors Hall of Fame Facts for Kids. Kiddle Encyclopedia.