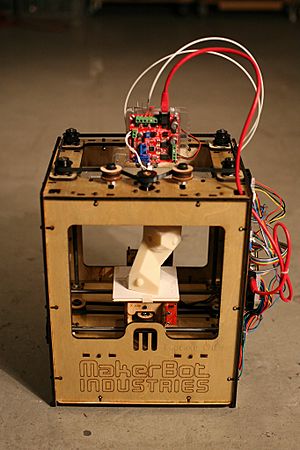 3D printing is a way of creating three dimensional (3D) solid objects. 3D printing is done by building up the object layer by layer. Usually, 3D printers use plastic, because it is easier to use and cheaper. Some 3D printers can 3D print with other materials, like metals and ceramics, but they cost too much money for most people.

3D printers are useful because they can make new objects very fast, and are good at making them very detailed. This means an engineer can test a lot of new designs and not have to wait for someone else to make them. They are also useful for fixing parts made of plastic, and for making toys, figures, and models. There are a lot of people who print 3D objects at home.

Since 2003, many more materials printers have been sold than before. Also, the cost of 3D printers has gone down.

1984 Alain Le Méhauté and others filed a patent for stereolithography (a laser-based 3D printer).

1989: S. Scott Crump developed FDM. It is the technology used by most 3D printers today. 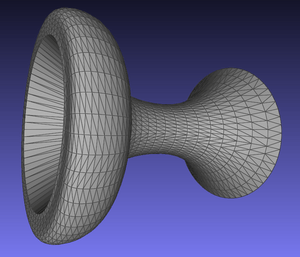 A computer model of an object before printing

The first step in 3D printing something is to make it on a computer. People do this with CAD (Computer Aided Design) software or a 3D scanner. To design models in CAD, people start with basic shapes, and build from that point. 3D scanners are machines that take lots of measurements of the object and automatically make a model on the computer. They can be very fast, but are also more expensive. CAD models are usually saved on computers as STL files. They are saved as lots of triangles, which saves space on the computer.

There are a lot of different ways that 3D printers work. There are also many different materials that can be used. Every method and material has its advantages and disadvantages.

The main things to think about when choosing a machine are usually speed, costs, and color. Printers that work directly with metals are generally expensive. However less expensive printers can be used to make a mold, which is then used to make metal parts. 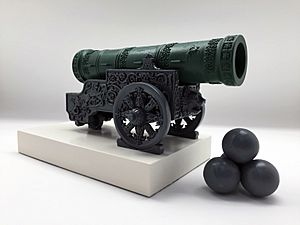 A finished 3D print of a cannon

Typical layers are around 100 μm thick, or about one tenth the thickness of a human hair. Prints can take anywhere from less than an hour to many days, depending on how complicated and big it is.

After the machine has finished printing, sometimes people finish the model. This means making small fixes to make it look better. Finishing includes taking off material that the printer placed to support the model. This sometimes can take a lot of time. There are ways to make it quicker, but it is often easiest to remove plastic by hand.

Lots of people are trying to develop cheap 3D printers for people to use at home. Libraries have also started to buy smaller 3D printers so that people can learn about them without having to buy one. Lots of work has been done by DIY communities, as well as schools and hacker communities. By 2017, more people were starting to use 3D printing in their own home for small items such as gears and small decorations. 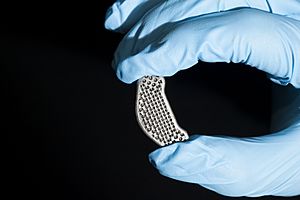 In March 2014, surgeons in Swansea used 3D printed parts to rebuild the face of a motorcyclist who had been badly injured in a road accident. 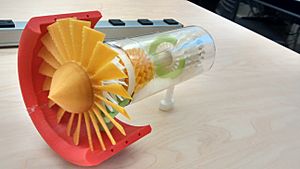 In 2014, a supercar was made by a Swedish company that utilizes many 3D printed components. Urbee was the first car in the world to have its bodywork and windows 3D printed. 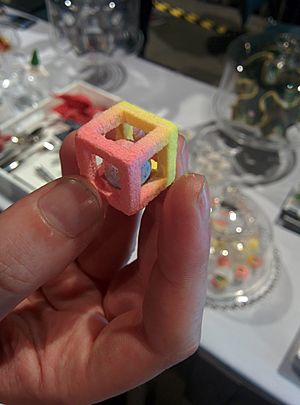 Food can be 3D printed. Lots of different foods can be printed, like chocolate and candy, and also flat foods such as crackers, pasta, and pizza. NASA is printing food to create less waste and to make food that has all the right nutrients for astronauts. In 2018, Giuseppe Scionti printed a food that was similar to meat.

In the last several years 3D printing has been used to make sure that important things from history are safe. Many museums have bought 3D printers and are making pieces to fix their relics. The Metropolitan Museum of Art and the British Museum have started using their 3D printers to make replicas to sell in the gift shop. The National Museum of Military History and Varna Historical Museum sell digital versions of their items online, which everyone can 3D print at home.

All content from Kiddle encyclopedia articles (including the article images and facts) can be freely used under Attribution-ShareAlike license, unless stated otherwise. Cite this article:
3D printing Facts for Kids. Kiddle Encyclopedia.