Windhoek at the end of the 19th century

Windhoek (German: Windhuk) is the capital city of Namibia. It has a population of 230,000 people. Windhoek is the trade center for sheep skins. The area was controlled by Germany in 1885. It became the capital of the German colony, German South-West Africa, in 1892. During World War I, Windhoek was captured by South Africa. It was the capital of South West Africa (Namibia) under South African control until the independence of Namibia in 1990.

Windhoek has a semi-desert climate.

Windhoek is known to be among the cleanest cities in Africa . 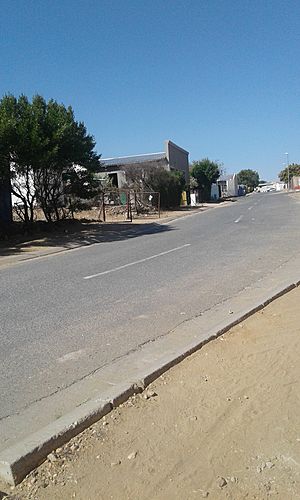 A street in Windhoek

All content from Kiddle encyclopedia articles (including the article images and facts) can be freely used under Attribution-ShareAlike license, unless stated otherwise. Cite this article:
Windhoek Facts for Kids. Kiddle Encyclopedia.