Oregon State University is a four-year university in Corvallis, Oregon in the United States. It is the largest university in Oregon, and as of February 2011, has over 23,000 students. The university has classes for both graduate and undergraduate students, and also offers classes online. 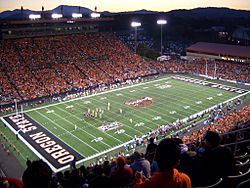 Oregon State's athletic teams are known as the Beavers. Its baseball team won the College World Series in 2006 and 2007.

All content from Kiddle encyclopedia articles (including the article images and facts) can be freely used under Attribution-ShareAlike license, unless stated otherwise. Cite this article:
Oregon State University Facts for Kids. Kiddle Encyclopedia.