The Hatfield Marine Science Center (HMSC) is a marine science research and education center next to Yaquina Bay of the Pacific Ocean in the U.S. state of Oregon. It is operated by Oregon State University in cooperation with five state and federal agencies co-located on site. Named after Mark Hatfield, a former U.S. Senator from Oregon, the HMSC occupies a 49-acre (20 ha) site in Newport.

The Hatfield Marine Science Center was opened in 1965. The center was preceded by the Yaquina Bay Fisheries Laboratory, which was established in 1939 on the opposite side of Yaquina Bay.

More than 300 people work at the HMSC, including Oregon State University faculty, graduate students, researchers, and staff from agencies including Oregon Department of Fish and Wildlife, U.S. Fish and Wildlife Service, U.S. Environmental Protection Agency, U.S. Department of Agriculture, and the National Oceanic and Atmospheric Administration (NOAA). NOAA employees at the HMSC are affiliated with the Alaska Fisheries Science Center, Northwest Fisheries Science Center, or the Pacific Marine Environmental Laboratory, all of which are headquartered in Seattle, Washington. 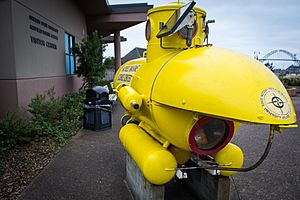 The Newmas submarine outside the HMSC Visitor Center

The Hatfield Marine Science Visitor Center is the public education wing of the HMSC. The visitor center's exhibits focus on marine species, marine research, and the coastal environment. The visitor center offers public programs and tours and is open year-round. Admission is by donation. 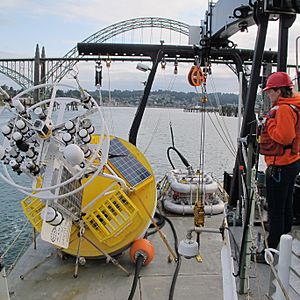 The Coastal Oregon Marine Experiment Station (COMES) is an agricultural research station dedicated to research and development for Oregon’s fishing, aquaculture and seafood, and helps to facilitate Oregon State University's service as a land-grant university for coastal communities. COMES is the largest of 12 branch agricultural research stations in Oregon. COMES is also hosted at the Seafood Research & Education Center in Astoria. 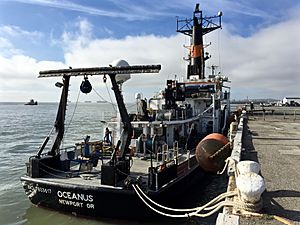 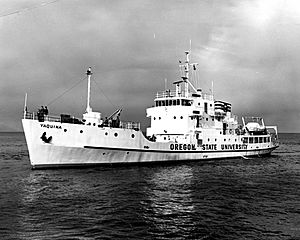 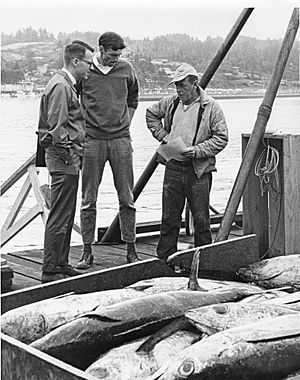 HMSC researchers talk to an albacore fisherman in Newport

Notable faculty and staff (past and present)

All content from Kiddle encyclopedia articles (including the article images and facts) can be freely used under Attribution-ShareAlike license, unless stated otherwise. Cite this article:
Hatfield Marine Science Center Facts for Kids. Kiddle Encyclopedia.