Lincoln County is one of the 36 counties in the U.S. state of Oregon. As of the 2020 census, its population was 50,395. The county seat is Newport. The county is named for Abraham Lincoln, 16th president of the United States.

At the time of the county's creation, Toledo was picked as the temporary county seat. In 1896 it was chosen as the permanent county seat. Three elections were held to determine if the county seat should be moved from Toledo to Newport. Twice these votes failed—in 1928 and 1938. In 1954, however, the vote went in Newport's favor. While Toledo has remained the industrial hub of Lincoln County, the city has never regained the position it once had.

Like Tillamook County to the north, for the first decades of its existence Lincoln County was isolated from the rest of the state. This was solved with the construction of U.S. Route 101 (completed in 1925), and the Salmon River Highway (completed in 1930). In 1936, as one of many federally funded construction projects, bridges were constructed across the bays at Waldport, Newport, and Siletz, eliminating the ferries needed to cross these bays.

The northern part of Lincoln County includes the Siletz Reservation, created by treaty in 1855. The reservation was open to non-Indian settlement between 1895 and 1925. The Siletz's tribal status was terminated by the federal government in 1954, but became the first Oregon tribe to have their tribal status reinstated in 1977. The current reservation totals 3,666 acres (14.84 km2). 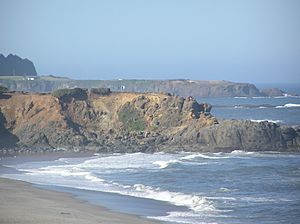 Principal industries of the county are travel (primarily tourism), trade, health services and construction. Paper manufacturing and fishing are still important although they contribute proportionally less to the county's employment than they used to. Newport is one of the two major fishing ports of Oregon (along with Astoria) that ranks in the top twenty of fishing ports in the U.S. Its port averaged 105 million pounds (48,000 t) of fish landed in 1997–2000. Newport is home of Oregon State University's Hatfield Marine Science Center, as well as the Oregon Coast Aquarium, and their fleet of ocean-going vessels.

Many of the other communities in Lincoln county depend on tourism as their principal source of income. The county's average nonfarm employment was 18,820 in 2007.

All content from Kiddle encyclopedia articles (including the article images and facts) can be freely used under Attribution-ShareAlike license, unless stated otherwise. Cite this article:
Lincoln County, Oregon Facts for Kids. Kiddle Encyclopedia.