The Oregon Islands National Wildlife Refuge was created in 1935 by the federal government. Haystack Rock off Cannon Beach was added to the refuge in 1968, and then became a wilderness area in 1978. The first mainland addition to the refuge came in 1991 when Coquille Point near Bandon was added. In 1999, the shipwreck of the New Carissa near Coos Bay spilled oil that killed some birds at the refuge. 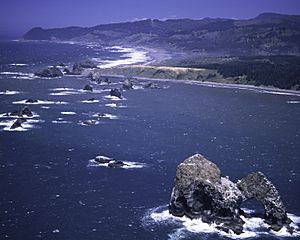 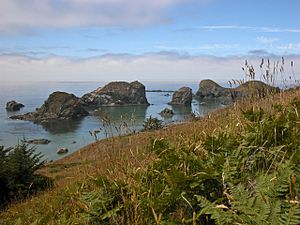 It is a sanctuary for nesting seabirds of thirteen species—some of the most important nesting seabird colonies in the U.S. Over 1.2 million individuals nest in colonies here, more than on the California and Washington coasts combined. The most prevalent species are common murres, tufted puffins, rhinoceros and Cassin's auklets, pigeon guillemots, Leach's storm-petrels, several species of gulls, and Caspian terns.

Four species of pinniped breed, molt, and rest on these lands, including harbor seals, Steller and California sea lions. The southern portion of the refuge provides the greatest number of breeding and pupping sites for Steller sea lions in the U.S. outside Alaska.

Except for Tillamook Rock Light and its surrounding 1-acre (4,000 m2) rock, all the islands are closed to public access. Boats must remain at least 500 feet (150 m) away, and aircraft are asked to maintain at least 2,000 ft (600 m) clearance. However, good viewing is possible from Coquille Point in Bandon and other locations suggested by the Oregon Coast Birding Trail.

The area is managed by the United States Fish and Wildlife Service.

All content from Kiddle encyclopedia articles (including the article images and facts) can be freely used under Attribution-ShareAlike license, unless stated otherwise. Cite this article:
Oregon Islands National Wildlife Refuge Facts for Kids. Kiddle Encyclopedia.