Curry County is the southwesternmost county in the U.S. state of Oregon. As of the 2020 census, the population was 23,446. The county seat is Gold Beach. The county is named for George Law Curry, a two-time governor of the Oregon Territory. Curry County includes the Brookings, OR Micropolitan Statistical Area. 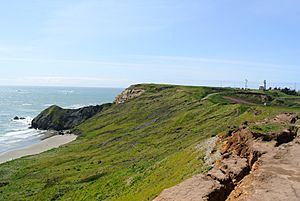 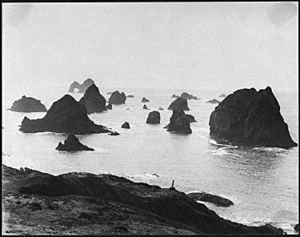 After discovery of gold and other precious metals along the beaches and rivers of Curry County in the mid-19th century, white settlements developed along the coast. Traveling mainly by water or by coast-hugging land routes, residents remained relatively isolated from the rest of Oregon until the 20th century. As mining declined in the region, the economy became more dependent on farming, livestock grazing, forest products such as Port Orford cedar (also known as Lawson's cypress) and myrtlewood, and tourism. Blueberries and nursery plants are among the important farm products, and most of the Easter lilies grown in the United States come from Curry County.

In 2001, the native tanoak in the county were afflicted by sudden oak death, caused by infection of Phytophthora ramorum. The pathogen, which by 2016 had killed hundreds of thousands of tanoaks in the county, thrives in moist places along the coast. It has killed other kinds of oaks such as California black oak in a region that includes many California counties as well as Curry County, and it has infected and damaged a variety of conifers and shrubs such as camellia. In Curry County, it threatens timber production, plant nurseries, and Christmas tree farms.

As of 2012, the Federal government owned 66 percent of the land in Curry County, while 22 percent was owned by private forest interests. About 7 percent was being farmed; the state of Oregon owned 1 percent, and 4 percent was devoted to other uses.

The Port of Brookings Harbor, a shallow-draft harbor at the mouth of the Chetco River, is considered one of the safest harbors on the coast. It is listed as a Harbor of Refuge by the United States Coast Guard.

All content from Kiddle encyclopedia articles (including the article images and facts) can be freely used under Attribution-ShareAlike license, unless stated otherwise. Cite this article:
Curry County, Oregon Facts for Kids. Kiddle Encyclopedia.