Tillamook County is one of the 36 counties in the U.S. state of Oregon. As of the 2020 census, the population was 27,390. The county seat is Tillamook. The county is named for the Killamuk, an American Indian tribe who were living in the area in the early 19th century at the time of European American settlement. The county is located within Northwest Oregon.

The Tillamook were the southernmost branch of the Coast Salish. They were separated from their more northern kinsmen by tribes speaking the Chinookian languages. The name Tillamook is of Chinook origin (a trade pidgin, which had developed along the lower Columbia.) According to Frank Boas, "It [Tillamook] means the people of Nekelim. The latter name means the place of Elim, or in the Cathlamet dialect, the place of Kelim. The initial t of Tillamook is the plural article, the terminal ook the Chinook plural ending —uks." Since there was one village in the area of Nehalem bay; the area was referred to as Nekelim (Ne Elim=singular). There were at least four villages on the south Tillamook bay according to Lewis and Clark; the south bay was called "T-Elim-ook" (the plural of Elim), meaning many villages of Elim. (The Chinook word for water was "chuck" and the Salish word for wetland is "naslex". The popular translation of Tillamook as meaning "land of many waters" seems to be 20th-century fabrication used in the tourist industry.)

Tillamook County, the 12th county in Oregon to be organized, was established on December 15, 1853, when the Territorial Legislature approved an act to create the new county out of an area previously included in Clatsop, Yamhill and Polk counties. Boundary changes were enacted with Clatsop County (1855, 1870, and 1893), Lincoln County in 1893, Washington County (1893, 1898), and Yamhill County (1887).

The Coast Range behind Tillamook was the scene of a repeated series of forest fires called the Tillamook Burn between 1933 and 1951. In 1948, a state ballot approved the sale of bonds to buy the burned-over areas and have the state rehabilitate the lands. The state lands were renamed the Tillamook State Forest by governor Tom McCall on July 18, 1973. By the end of the 20th century, the replanted growth was considered mature enough to be commercially harvested.

The Tillamook airbase for blimps was commissioned on December 1, 1942, as U.S. Naval Air Station Tillamook. The two wooden hangars used to house these airships were decommissioned after World War II and deeded to Tillamook County. One of the hangars (Hangar B) is a national historic landmark and the location of the Tillamook Air Museum. The other hangar, (Hangar A) burned down in 1992.

The U.S. Mount Hebo Air Force Station was a Cold War air defense installation from 1956 to 1980. Located south of Tillamook, at the top of 3,154-foot (961 m) high Mount Hebo, Air Force radars operated by the 689th Radar Squadron and the 14th Missile Warning Squadron were essential parts of the nation's integrated air defenses. The large radomes protecting the radars from adverse weather effects could be seen silhouetted against the sky from most of Tillamook County.

Development along U.S. Route 101 to the north of Tillamook during the last part of the 20th century has blocked part of the flood plain of the Wilson River, contributing to repeated winter flooding in the city. 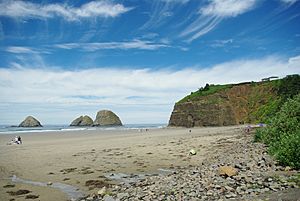 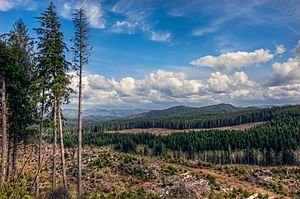 The state of Oregon owns 44% of the land inside the county boundaries, mostly as part of the Tillamook State Forest. The State Forest was created as a result of the 355,000-acre (144,000 ha) Tillamook Burn. The reforested burn is rapidly maturing, and there is local expectation that it will assist in the recovery of the local timber industry. Three lumber mills currently operate in Tillamook County—one at Garibaldi, one in Tillamook, and one south of Tillamook at the former Naval Air Station.

The county's scenic coastline, which includes four bays, nine rivers and the Pacific Ocean, helps draw visitors to the county for outdoor recreation, agritourism, and cultural experiences. U.S. Route 101, travels the length of the Oregon Coast, and brings many travelers through the county by car, recreational vehicle and bike. The coast also provides locations for vacation homes for inhabitants of nearby Portland and the Willamette Valley. According to the 2015 Dean Runyan Travel Impacts study, tourism brings $229.4 million in visitor spending to Tillamook County.

Fishing is a very important part of the economy. Oysters are farmed in the bay and keep the bay fairly clean. Sport fishing makes up most of the rest. With nine rivers, salmon is the biggest with nearly recovered runs as salmon had to be given away to the food bank. Tillamook County is the first in the continental United States to be declared ready for a tsunami. This designation was given by the National Oceanic and Atmospheric Administration after the county paid $15,000 for 27 warning sirens and an emergency radio system. In 2012, county leaders voted to deactivate most of the sirens, in favor of more modern methods. With effort from local residents, the communities of Garibaldi and Rockaway Beach retained their sirens, which will be activated locally.

All content from Kiddle encyclopedia articles (including the article images and facts) can be freely used under Attribution-ShareAlike license, unless stated otherwise. Cite this article:
Tillamook County, Oregon Facts for Kids. Kiddle Encyclopedia.