The city of Tillamook is the county seat of Tillamook County, Oregon, United States. The city is located on the southeast end of Tillamook Bay on the Pacific Ocean. The population was 5,231 at the 2020 census.

The city is named for the Tillamook people, a Native American tribe speaking a Salishan language who lived in this area until the early 19th century.

Anthropologist Franz Boas identifies the Tillamook Indians as the southernmost branch of the Coast Salish peoples of the Pacific Northwest. This group was separated geographically from the northern branch by tribes of Chinookan peoples who occupied territory between them. The name Tillamook, he says, is of Chinook origin, and refers to the people of a locality known as Elim or Kelim. They spoke Tillamook, a combination of two dialects. Tillamook culture differed from that of the northern Coast Salish, Boas says, and might have been influenced by tribal cultures to the south, in what is now northern California.

According to the United States Census Bureau, the city has a total area of 1.7 square miles (4.40 km2), all of it land. The Tillamook area is also home to five rivers, the Tillamook, Trask, Wilson, Kilchis, and the Miami just north of the city.

Tillamook has a climate that lies between the cool-summer Mediterranean climate (csb) and the oceanic climate (cfb).

Tillamook has a mild and wet climate with very little seasonal temperature variation due to its proximity to the Pacific Ocean. From November through April, daytime high temperatures range from the high 40s to the high 50s with abundant rainfall - including more than 13 inches (330 mm) per month in November, December, and January. Snowfall is very rare, but winter floods are a common occurrence. Between April and October, the precipitation in Tillamook is comparatively lighter, but still remains much wetter than the population centers in the Willamette Valley. Tillamook's annual precipitation averages about 88 inches (2,200 mm) compared to only 36 inches (910 mm) in Portland. Summers in Tillamook are brief and mild with average daytime temperatures in the upper 60s, although daytime temperatures can occasionally soar into the 80s and 90s for days at a time. Summer is by far the driest season in Tillamook with only 1.35 inches (34 mm) and 1.33 inches of rain falling in July and August, respectively.

The Tillamook Air Museum, which features over 15 aircraft, an Exhibit Hall with rare wartime and aviation-themed artifacts, is located just south of the city. It is housed in a wooden WWII blimp hangar that was once a part of Naval Air Station Tillamook. Its sister hangar (Hangar A) was destroyed by a fire in 1992. The hangars were built with old-growth trees and one can see the huge seamless beams inside the buildings. 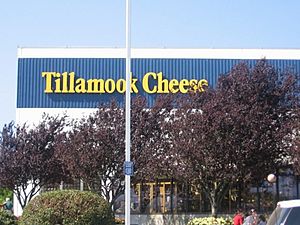 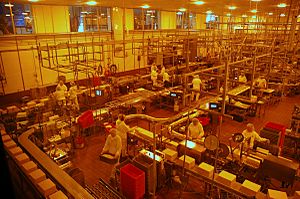 Inside the Tillamook Cheese Factory 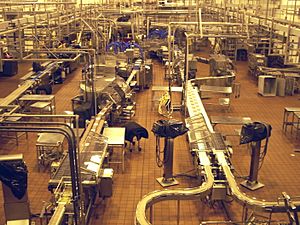 The Tillamook Cheese Factory, located at 4185 U.S. 101 North in Tillamook, Oregon, is the Tillamook County Creamery Association's original cheese production facility. The Tillamook Cheese Factory also serves as a Visitor Center and hosts over 1 million tourists each year. Visitors can learn about the cheese-making process, cheese-packaging process, and the ice cream-making process from a viewing gallery over the main production floor. Tours are self-guided and self-paced, and are augmented by video presentations and interactive kiosks. Tours inside the actual cheese-processing area of the plant were discontinued in 1967 due to health and safety regulations.

Historically, the Tillamook economy has been based primarily on dairy farms. The farmland surrounding the city is used for grazing the milk cattle that supply the Tillamook County Creamery Association's production of cheese, particularly cheddar, gourmet ice cream and yogurt, and other dairy products. Approximately one million people visit the cheese factory (located north of Tillamook on Highway 101) each year.

The lumber industry also is experiencing a comeback from the replanting that followed the Tillamook Burn forest fires of the mid-20th century. The burned remains of some of the trees can still be found in the forests surrounding Tillamook.

Tillamook also serves tourists on their way to the ocean beaches and as a location for second homes.

All content from Kiddle encyclopedia articles (including the article images and facts) can be freely used under Attribution-ShareAlike license, unless stated otherwise. Cite this article:
Tillamook, Oregon Facts for Kids. Kiddle Encyclopedia.