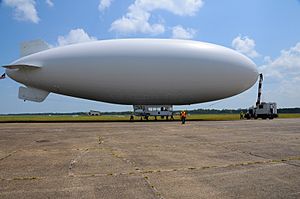 The Spirit of Goodyear, one of the iconic Goodyear Blimps

A blimp, or non-rigid airship, is an airship (dirigible) or barrage balloon without an internal structural framework or a keel. Unlike semi-rigid and rigid airships (e.g. Zeppelins), blimps rely on the pressure of the lifting gas (usually helium, rather than hydrogen) inside the envelope and the strength of the envelope itself to maintain their shape. 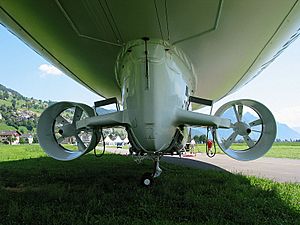 Steerable ducted fans on a Skyship 600 provide thrust, limited direction control, and also serve to inflate the ballonets to maintain the necessary overpressure

Since blimps keep their shape with internal overpressure, typically the only solid parts are the passenger car (gondola) and the tail fins. A non-rigid airship that uses heated air instead of a light gas (such as helium) as a lifting medium is called a hot-air airship (sometimes there are battens near the bow, which assist with higher forces there from a mooring attachment or from the greater aerodynamic pressures there).

Volume changes of the lifting gas due to temperature changes or to changes of altitude are compensated for by pumping air into internal ballonets (air bags) to maintain the overpressure. Without sufficient overpressure, the blimp loses its ability to be steered and is slowed due to increased drag and distortion. The propeller air stream can be used to inflate the ballonets and so the hull. In some models, such as the Skyship 600, differential ballonet inflation can provide a measure of pitch trim control.

The engines driving the propellers are usually directly attached to the gondola, and in some models are partly steerable.

Blimps are the most commonly built airships because they are relatively easy to build and easy to transport once deflated. However, because of their unstable hull, their size is limited. A blimp with too long a hull may kink in the middle when the overpressure is insufficient or when maneuvered too fast (this has also happened with semi-rigid airships with weak keels). This led to the development of semi-rigids and rigid airships.

Modern blimps are launched somewhat heavier than air (overweight), in contrast to historic blimps. The missing lift is provided by lifting the nose and using engine power, or by angling the engine thrust. Some types also use steerable propellers or ducted fans. Operating in a state heavier than air avoids the need to dump ballast at lift-off and also avoids the need to lose costly helium lifting gas on landing (most of the Zeppelins achieved lift with very inexpensive hydrogen, which could be vented without concern to decrease altitude). 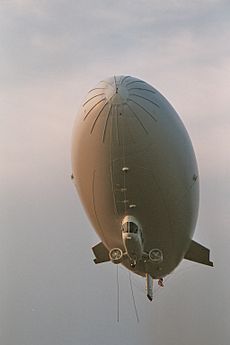 A modern blimp from Airship Management Services showing a strengthened nose, ducted fans attached to the gondola under the hull, and cable-braced fins at the tail

The origin of the word "blimp" has been the subject of some confusion. Ege notes two possible derivations:

Colloquially [non-rigid airships] always were referred to as 'Blimps'. Over the years several explanations have been advanced about the origin of this word. The most common is that in the military vernacular the Type B was referred to as 'limp bag', which was simply abbreviated to 'blimp'. An alternative explanation is that on 5 December 1915 A. D. Cunningham, R.N., commander of the Capel-Le-Ferne Air Ship Station, flipped the envelope of the SS.12 with his fingers during an inspection, which produced a sound that he pronounced as 'blimp'; and that the word then caught on as the nickname for all small non-rigid airships.

The onomatopoeic derivation, as the sound the airship makes when one taps the envelope (balloon) with a finger, has been recorded in the British Aeronautical Journal.

A 1943 etymology published in the New York Times supports the British origin during the First World War when the British were experimenting with lighter-than-air craft. The initial non-rigid aircraft was called the A-limp; and a second version called the B-limp was deemed more satisfactory.

Yet a third derivation is given by Barnes & James in Shorts Aircraft since 1900:

In February 1915 the need for anti-submarine patrol airships became urgent, and the Submarine Scout type was quickly improvised by hanging an obsolete B.E.2c fuselage from a spare Willows envelope; this was done by the R.N.A.S. at Kingsnorth, and on seeing the result for the first time, Horace Short, already noted for his very apt and original vocabulary, named it "Blimp", adding, "What else would you call it?"

Dr. A.D. Topping researched the origins of the word and concluded that the British had never had a "Type B, limp" designation, and that Cunningham's coinage appeared to be the correct explanation.

The Oxford English Dictionary notes its use in print in 1916 "Visited the Blimps..this afternoon at Capel." and in 1918 (in the Illustrated London News) "an onomatopœic name invented by that genius for apposite nomenclature, the late Horace Short." The B-limp. 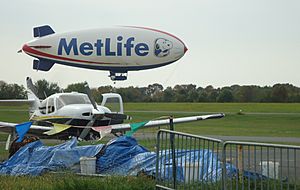 The B-class blimps were patrol airships operated by the United States Navy during and shortly after World War I. The Navy learned a great deal from the DN-1 fiasco. The result was the very successful B-type airships. Dr. Jerome Hunsaker was asked to develop a theory of airship design. This was followed by then-Lieutenant John H. Towers, USN, returning from Europe having inspected British designs, and the U.S. Navy subsequently sought bids for 16 blimps from American manufacturers. On 4 February 1917 the Secretary of the Navy directed that 16 nonrigid airships of Class B be procured. [1] Ultimately Goodyear built 9 envelopes, Goodrich built 5 and Curtiss built the gondolas for all of those 14 ships. Connecticut Aircraft contracted with U.S. Rubber for its two envelopes and with Pigeon Fraser for its gondolas. The Curtiss-built gondolas were modified JN-4 fuselages and were powered by OX-5 engines. The Connecticut Aircraft blimps were powered by Hall-Scott engines.

In 1930 a former German airship officer, Captain Anton Heinen, working in the US for the US Navy on its dirigible fleet, attempted to design and build a four place blimp called the "family air yacht" for private fliers which the inventor claimed would be priced below $10,000 and easier to fly than a fixed wing aircraft if placed in production. It was unsuccessful.

In 2014, there were approximately 13 active advertising airships in the world today. Van Wagner Airship Group is the owner and operator of 8 of these active ships, including the Hood Blimp, DirecTV blimp, and the MetLife blimp.

All content from Kiddle encyclopedia articles (including the article images and facts) can be freely used under Attribution-ShareAlike license, unless stated otherwise. Cite this article:
Blimp Facts for Kids. Kiddle Encyclopedia.