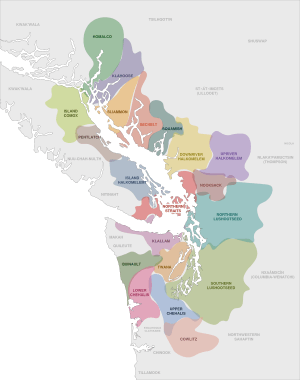 Distribution of Coast Salish languages in the early 19th century

The Coast Salish is a group of ethnically and linguistically related Indigenous peoples of the Pacific Northwest Coast, living in British Columbia, Canada and the U.S. states of Washington and Oregon. They speak one of the Coast Salish languages. Nuxalk (Bella Coola) nation are usually included in the group, although their language is more closely related to Interior Salish languages.

The Coast Salish are a large, loose grouping of many tribes with numerous distinct cultures and languages. Territory claimed by Coast Salish peoples span from the northern limit of the Salish Sea (aka Strait of Georgia) on the inside of Vancouver Island and covers most of southern Vancouver Island, all of the Lower Mainland and most of Puget Sound and the Olympic Peninsula (except for territories of now-extinct Chemakum people). Their traditional territories coincide with modern major metropolitan areas, namely Victoria, Vancouver, and Seattle. The Tillamook or Nehalem around Tillamook, Oregon are the southernmost of the Coast Salish peoples.

Coast Salish cultures differ considerably from those of their northern neighbours. They have a patrilineal rather than matrilineal kinship system, with inheritance and descent passed through the male line. According to a 2013 estimate, the population of Coast Salish numbers at least 56,590 people, made of 28,406 Status Indians registered to Coast Salish bands in British Columbia, and 28,284 enrolled members of federally recognized Coast Salish tribes in Washington State.

All content from Kiddle encyclopedia articles (including the article images and facts) can be freely used under Attribution-ShareAlike license, unless stated otherwise. Cite this article:
Coast Salish Facts for Kids. Kiddle Encyclopedia.